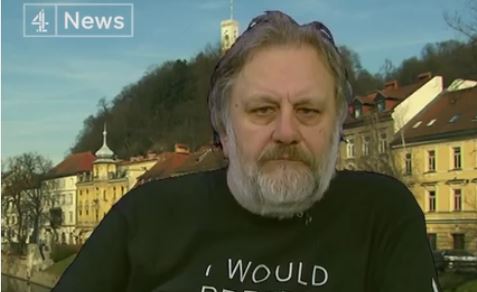 A minority of those on the Left have responded to Trump’s election with rational reflection and a critical look at some of their positions that were rejected by voters.

However, the majority of the Left seem to be throwing a collective temper tantrum and resorting to all-too-familiar Alinskyite tactics to disparage Trump.

Slovenian philosopher Slavoj Zizek thinks this is a big mistake.

Zizek’s notoriety has been growing in recent years. He is known as “the most prominent living Marxist philosopher,” and as such is not a big fan of Trump.

At the same time, in an interview immediately before last November’s election, he said that if he was an American citizen, he would vote for Trump. Even though he is “horrified at [Trump],” he thought “Hillary is the true danger,” and that the Trump phenomenon could lead to “a kind of big awakening” where both parties “would have to return to basics [and] rethink themselves.”

But the Left isn’t really doing this, and in a video posted Friday, Zizek issued a stern warning about the potential consequences of their “mocking” of Trump without offering a positive vision:

“You know what worries me with Trump? Don’t underestimate him. Often, quite often, it happens that even if a leader like Trump is a populist demagogue… at least in the short term, he may be able to deliver. You know it’s as if these left liberal commentators, who are typically, the most successful are comedians like John Oliver, Jon Stewart and others, they don’t see that by mocking Trump in this way, they don’t really undermine him. They just render bitter and more fanatical those who support Trump.

And this is very sad, instead of proposing an alternate vision of how to change things, all the liberal left is doing or at least what it’s doing in the most convincing way, is making fun, demonstrating the stupidity… So what I’m really afraid of now is that what if at least for some shorter period of time, by this I mean a couple of years, Trump will be a relative success? It may happen. The world is already slowly accommodating to Trump… Populism in [the] short term also works. Remember, Hitler—everybody was laughing at him, but for the first four years of his rule he did practically abolish unemployment and so on… I’m not saying this will happen. I’m just saying that if a politician like Trump is inconsistent—and he clearly is inconsistent, it’s ridiculous… he proclaims to be the voice of the poor, exploited, those in [the] shadow[s], and then the measure [of what] he’s doing now is what? More monopoly, more freedom to big banks and so on… But it’s doesn’t automatically mean he will fail. I’m a pessimist here.”

In sum, Zizek believes that the Left’s snarkiness may only serve to embitter many of Trump’s supporters, thus diminishing their ability to critically evaluate Trump in the future.

And as we know from history, that can be a dangerous thing.