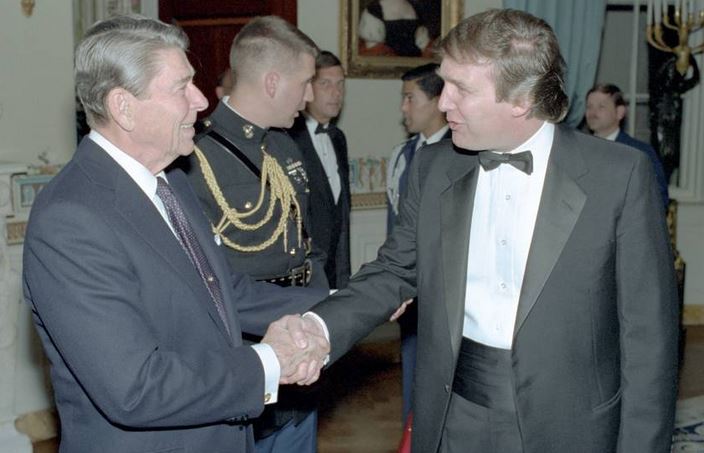 Republicans today idolize Ronald Reagan more than any historic figure with the possible exception of Jesus. He is the gold standard of GOP politics, quoted on the stump by would-be lawmakers at the local, state, and federal levels, wonks at policy centers, and Bible-toting evangelicals.

In the Washington Post on Monday, on what would have been the Gipper’s 106th birthday, Henry Olsen argued that Donald Trump is the last, best hope to re-Reaganize the GOP.

Olsen, author of the upcoming Ronald Reagan: New Deal Republican, says Reagan, like Trump, was not an anti-statist in the Barry Goldwater mold, but a pro-government Republican who was not afraid to flex the muscles of the federal government when it suited his agenda.

Reagan did not shrink from endorsing government action when needed as governor or as president. He raised the gas tax in 1983 to fund road construction and repair. He also imposed sanctions on Japanese industries and companies for what he believed were unfair trade practices even as he sought to extend free-trade agreements throughout the world.

Even Reagan’s support for immigration was limited by a belief in protecting U.S. workers. He supported taking in genuine refugees fleeing communism or dictators, but he opposed open borders. He wrote one correspondent in 1981 that he favored immigration quotas because “there is no way that we could, without limit, take all who want to come here simply for the opportunity this country offers.”

Each of these positions has a clear analogue in Trump’s early acts or statements. Trump’s position that everyone should have some sort of health insurance finds its counterpart in Reagan’s long-expressed beliefs. Trump’s belief in building more public infrastructure could be funded by a gas tax hike just like Reagan’s was. His belief that free trade should be fair trade was Reagan’s, and his belief that immigration controls to protect U.S. workers are just also was Reagan’s.

Olsen makes a decent case as to why it might be in Republican interests, specifically in the Electoral College, to channel a bigger government approach.

But his thesis (in the article at least, his book does not come out until June) ignores a couple of relevant facts: 1) Reagan’s rhetoric on shrinking government was more in line with Goldwater than the Nelson Rockefeller wing of the party; 2) Reagan, unlike Trump, had a deep knowledge of and interest in conservative ideas and principles.

There are certainly some parallels to the political policies of Reagan and Trump, similarities that extend to their personal lives (both were former Democrats who were entertainers before they turned to politics, for example).

As to whether Trump represents the last, best hope for Reaganism… well, time will tell, but I have my doubts. What do you think?