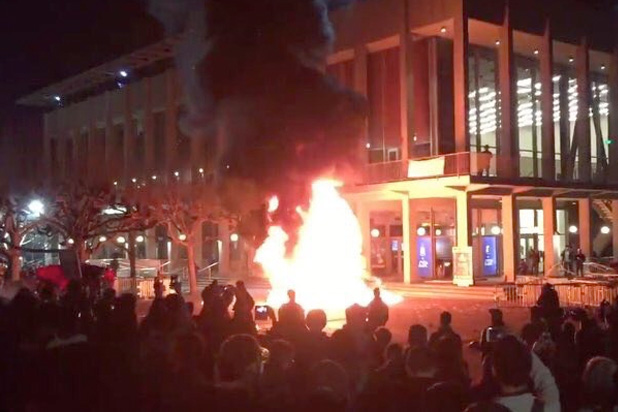 Wednesday night at the University of California at Berkeley, a huge mob of protestors successfully prevented political activist Milo Yiannopoulos from speaking at a planned event. Armed with bricks and fireworks, they vandalized university property and used police barriers as battering rams. The group successfully breached at least one of the doors, swarmed the venue, and ignited several fires outside. Yiannopoulos escaped safely, but the event was cancelled.

The scene was ghastly reminiscent of the rise of mob Jacobinism during the French Revolution. There, large crowds of agitators with ambiguous aims broke out in Paris, with the only common trait binding them together being the propensity to enact political ends through violence. Without suggesting the Berkeley episode has gotten so radically out of control as in 18th-century France, the tactics used seem eerily similar.

Among the caustic feats of the Parisian mobs were the mass executions of thousands, the undercutting of the French constitutional system that had only been recently established, and the elevation of a despotic oligarchy – the Committee of Public Safety – that suspended the constitution and assumed all legislative, executive, and judicial authority over the country.

Infrastructure and private property was destroyed, people were killed, and no redeemable political ends were actually achieved. Whatever merits were contained within their sentiments were effectively counteracted by the hostile approach of the mobs. The streak of violence led to the ascension of Maximilien Robespierre, a talented lawyer with incredible political ambition. Pointing to the continual violence, he alleged that such conditions called for a temporary suspension of the French Constitution of 1793 – the political framework under the French system. The result of this gave Robespierre immense power, which he used to squash his political adversaries and wreak havoc over all of France.

Whatever pro-republican intentions existing among the masses were effectively swept aside and rendered irrelevant by the counterweight of the destruction. Robespierre initiated the Great Terror, a mass execution campaign that put anyone so much as suspected of being a counterrevolutionary under “the people’s razor” – the guillotine. In the end, many of the same forceful protestors that had fed the machine that gave rise to Robespierre were summarily killed by the siphon of power they helped establish.

Of course, there is no repercussion awaiting the Berkeley vandalizers in the United States, but the guillotine still serves as an important metaphor that sympathizers of the recent demonstration should heed. This is because many of those commiserating with the Berkeley demonstrators seem to have never stopped to consider the possible negative ramifications of their actions.

With news of the event being broadly disseminated by national media outlets, the event has thousands of Americans scouring the internet for Milo Yiannopoulos. Certainly, many are only now discovering key aspects of his political platform. With notoriety as the actual goal for many political activists, the protests have inevitably given Yiannopoulos newfound support. Like the guillotine, the protestors cut off their own heads off – along with the credibility of their arguments – through such an approach.

Beyond the antithetical effect of the protests, there has also been confusion among some regarding the ethics of protests in general. Instead of assuming the straw man argument that those who object to these deeds deny the right to free assembly and the redress of grievances, one must stop and consider all elements involved. The right to protest, of course, does not give a blanket sanction for vandalism and property destruction which results from such acts. Indeed, respect for property has been long considered one of the key foundations of traditional liberty, and in seminal philosopher John Locke’s mind, one of the only three reasons governments should be established in the first place.

The Berkeley incident has riled even those who are apt to disagree with Milo to come to his defense against these brute tactics. Meanwhile, regular people seem to be generally put off by the madness and indiscretion. Despite this tendency, former vice presidential nominee Tim Kaine urged supporters just a day prior to “fight in the streets” against Trump and his supporters. Though such a suggestion soon came to fruition in a way Kaine may never have imagined, the fierce response calls his suggestion into question.

In a way, this episode is a microcosm for the recent presidential election cycle. Rather than to help perpetuate a political cause, progressive outbursts such as the Berkeley incident have done much to sour attitudes, create unnecessary animosity, and align political factions against the progressive left. Where otherwise there may have been empathy for the holders of such leanings, there is now newly-seeded contempt.