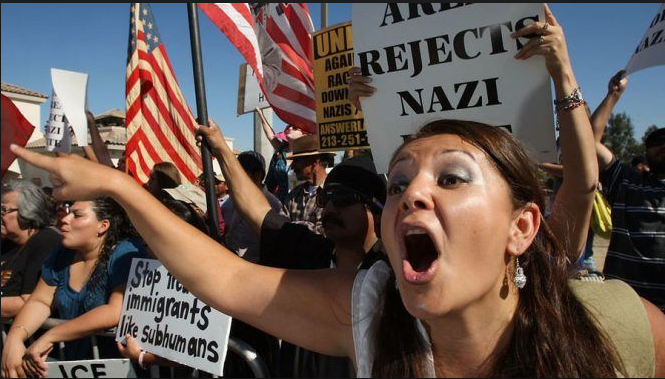 Recently, Harvard political theorist Danielle Allen wrote in the Washington Post of “The most important phrase in the Pledge of Allegiance” — “with liberty and justice for all.”

Allen recognized that justice required “equality before the law” and that freedom exists “only when it is for everyone.” But she confused democracy — defined as progressives “build[ing] a distributed majority across the country, as is needed for electoral college victory” — with liberty, which is very different. Similarly, she replaced the traditional meaning of justice (“giving each his own,” according to Cicero) with a version of “social justice” inconsistent with it. And her two primary examples of rights — “rights” to education and health care — were inconsistent with both liberty for all and justice for all.

Americans cannot have both liberty and this type of social justice — under whose aegis one can assert rights to be provided education and health care, not to mention food, housing, etc. Positive rights to receive such things, absent an obligation to earn them, must violate others’ liberty, because a government must take citizens’ resources without their consent to fund them. Providing such government benefits for some forcibly violates others’ rights to themselves and their property.

The only justice that can be “for all” involves defending negative rights — prohibitions laid out against others, especially the government, to prevent unwanted intrusions — not rights to be given things. Further, only such justice can be reconciled with liberty “for all.” That is why negative rights are what the Declaration of Independence and the Constitution, especially the Bill of Rights, were intended to protect. But those foundational freedoms continue to be eroded by the ongoing search to invent ever-more positive rights.

Echoing John Locke, The Declaration of Independence asserts that all have unalienable rights, including liberty, and that government’s central purpose is to defend those negative rights. Each citizen can enjoy them without infringing on anyone else’s rights, because they impose on others only the obligation not to invade or interfere. But when the government creates new positive rights — which require extracting resources from others — these new “rights” violate others’ true unalienable rights. In other words, people recognize these positive rights as theft except when the government does it.

Almost all of Americans’ rights laid out in the Constitution are protections against government abuse. The preamble makes that clear, as does the enumeration of the limited powers granted to the federal government. That is reinforced by explicit descriptions of some powers not given, particularly in the Bill of Rights, whose negative rights Justice Hugo Black called the “Thou Shalt Nots.” Even the Bill of Rights’ central positive right — to a jury trial — is largely to defend innocent citizens’ negative rights against being railroaded by government. And the 9th and 10th Amendments leave no doubt that all rights not expressly delegated to the federal government (including health care and education) are retained by the states or the people.

Liberty means I rule myself, protected by my negative rights, and voluntary agreements are the means of resolving conflict. In contrast, assigning positive rights to others means someone else rules over the choices and resources taken from me. But since no one has the right to rob me, they cannot delegate such a right to the government to force me to provide resources it wishes to give to others, even if by majority vote. For our government to remain within its delegated authority, reflecting the consent of the governed expressed in “the highest law of the land,” it can only enforce negative rights.

Our country was founded on unalienable rights, not rights granted by Washington. That means government has no legitimate power to take them away. However, as people have discovered ever-more things they want others to pay for, and manipulated the language of rights to create popular support, our government has increasingly turned to violating the rights it was instituted to defend. And there is no way to square such coercive “social justice” with “liberty and justice for all.”

This Mises Institute article was republished with permission.  [Image Credit: Return of Kings]