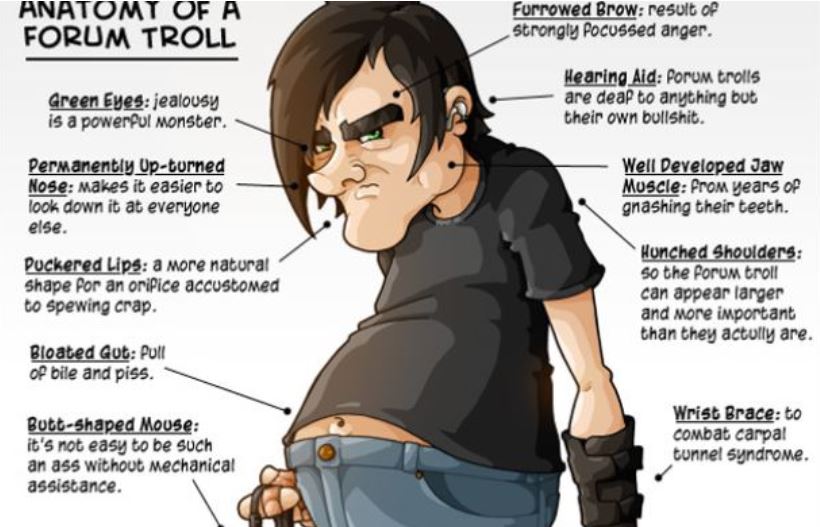 How do you deal with those pesky trolls who seem to be everywhere on social media sites nowadays? Nothing ruins the cool vibe of the social media experience more than their online diatribes, meant to tease and instigate with every key stroke.

Kendall Walters defines a troll as “someone who deliberately provokes others online, typically through inflammatory, offensive, or provocative comments. Their intent is to upset others and elicit an emotional response (preferably an angry one). In the pursuit of their goal, trolls might rant (often on a topic unrelated to the one at hand), make ad-hominem [personal] attacks, post death threats, or spew hate speech.”

Trolling behavior irritates, upsets and might even make you a little depressed. So what do you do about it? One approach is to lower yourself to their trashy level and respond in kind.

Another is to threaten the troll. Jeffrey Hayzlett of Entrepreneur relates the story of a troll who was “linking [his] name with robbers, thieves and other unscrupulous characters” on the troll’s blog:

“I tracked down this individual and called him at home to figure out why he was using my name in connection with these things on his blog. His answer? Every time he wrote about me, his website traffic increased. He was using my name to bring more attention to his posts. I told him if he didn’t remove these entries and quit using my name, I would take action. Needless to say, he took down these references rather quickly.”

Tim Dowling of The Guardian recommends avoiding both strategies. His advice is to not feed the trolls:

“Trolling is one of those rare problems best handled by ignoring it – if you do, it usually goes away. Trolls want your attention and discomfiture; they feed on your impotent rage. If they’re trying to be funny, your willingness to rise to the bait provides the punchline. If you don’t, there’s no joke. The secret to withholding attention is consistency: never respond. That way, the trolls can’t even be sure you’ve read their abuse.”

Pyrrhonian skeptics surely lacked the foresight to predict the rise of the internet. Nevertheless, these philosophers can offer some valuable insight into how to deal with trolling behavior.

In ancient Greece, Pyrrho of Elis (365-270 B.C.E.) started with the idea (borrowed from the Indian “gymnosophists”) that nothing could ever be known with absolute certainty. Other skeptics, such as Aenesidemus (81-11 B.C.E.) and Sextus Empiricus (160-210 A.D.), would follow Pyrrho’s example, refining his skeptical method in order to refute the Stoics and Epicureans.

Here are some pointers for handling social media trolls, each inspired by the Pyrrhonian skeptics:

In the social media war between skeptics and trolls, I’d hazard a guess (because I cannot know anything for certain) that the skeptics will always have the advantage.