I don’t often use the literary tactic of referring to something as the “best-ever.” Indeed, the only time that phrase appeared in the title of a column was back in 2014 when I smugly wrote about the collapse of government-run single-payer healthcare in Vermont. Recalling what Justice Brandeis wrote about states being the “laboratories of democracy,” I asserted that the disaster in the Green Mountain State taught the entire nation a valuable lesson about the dangers of bad policy and that this was the “best-ever argument for federalism.”

Well, it’s time to once again use this superlative because consumers in California get the “best-ever receipt” when they make purchases at Firearms Unknown. Here’s the example that’s gone viral, and I’ve highlighted the relevant portion that gives an amusing description of California’s onerous sales tax. 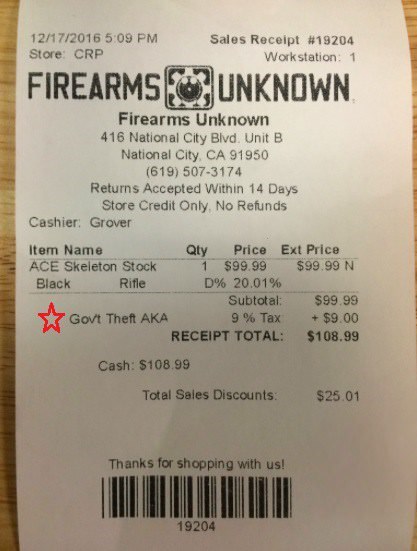 By the way, not everything you see on the Internet is true (yes, shocking news). And since the folks at Independent Journal Review didn’t want to make the mistake of sharing without checking (like I did when trying to mock Justin Trudeau), they actually did some due diligence.

Many times, viral photos are too good to be true. So we contacted Firearms Unknown in National City, CA, to find out if this was one of those times. Sure enough, a representative with Firearms Unknown confirmed the receipt’s authenticity to Independent Journal Review. Then, he let out a chuckle. I guess if you’re going to operate a gun shop in a far-left state like California, you better have a good sense of humor. Bravo, Firearms Unknown.

Yes, kudos to the store, but I also want to take this opportunity to make a serious point about tax visibility.

One of the many reasons to oppose a value-added tax is that the tax almost always is hidden from consumers. When taxpayers make purchases in Europe, they don’t know that VATs are responsible, on average, for about 21 percent of the purchase price.

So it’s good that consumers in America know there’s a sales tax, both because it’s visible on their receipts and also because they can see the difference between the price on the shelf and the price at the cash register.

Though this system isn’t perfect. How many Americans, after all, know how much sales tax they paid last year?

The visibility issue also exists with the income tax. In theory, we all know what we paid the previous year based on our annual tax returns. But because of withholding, most Americans don’t really pay attention to that very important number and instead focus on whether they’re getting a refund. They actually think a big refund is a great outcome, even though it simply means that they gave the government an interest-free loan by over-paying their taxes during the year!

This is one of the reasons why I’m such a big fan of Hong Kong, in part because of the flat tax. Not only is there a low rate and no double taxation, but there’s also no withholding. Instead, taxpayers write checks to the government twice annually. So they are fully aware of the cost of government, which may explain why the fiscal burden of government is relatively low (it also helps that there is a constitutional spending cap).

In the United States, the only levies that are visible (at least some of the time) are property taxes. Taxpayers usually have to make annual or semiannual payments on cars and houses (though property taxes on homes are sometimes built into mortgage payments).

And when you have to write a lump-sum check to the government, that’s a wonderful opportunity for people to ponder whether they’re actually getting good value for their money.

And since the answer almost always is no, it’s easy to understand why politicians are big fans of policies (such as VATs and withholding) that disguise the burden of taxation.

Daniel J. Mitchell is a senior fellow at the Cato Institute who specializes in fiscal policy, particularly tax reform, international tax competition, and the economic burden of government spending. He also serves on the editorial board of the Cayman Financial Review.

This article was originally published on FEE.org. Read the original article. Republished from Dan Mitchell’s blog.