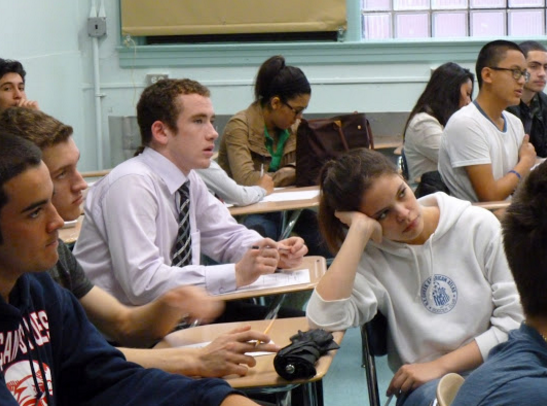 My academic field, American Studies, is the interdisciplinary study of American cultures, past and present. Once it was a vibrant and useful discipline. Today, I’m sad to report, it is a regular source for “What wacky stuff are they up to on campus?” articles and blogs.

These days, when American Studies captures any attention, it’s usually for unfortunate reasons.

Sometimes, a jargon-y article wins an ironic bad writing award. Consider, for example this excerpt from a paper in the Australasian Journal of American Studies:

Natural history museums, like the American Museum, constitute one decisive means for power to de-privatize and re-publicize, if only ever so slightly, the realms of death by putting dead remains into public service as social tokens of collective life, rereading dead fossils as chronicles of life’s everlasting quest for survival, and canonizing now dead individuals as nomological emblems of still living collectives in Nature and History. An anatomo-politics of human and non-human bodies is sustained by accumulating and classifying such necroliths in the museum’s observational/expositional performances.

Sometimes a pop culture class becomes an extramural joke, such as the “Zombie Studies” courses that were all the rage a few years ago. And sometimes an American Studies professor decides to use the classroom for “social activism” where the idea is to substitute studying with protesting.

I might chuckle if I weren’t employed and mentally invested in the field, and if I did not have residual respect for the open-minded, pragmatic approaches which marked American Studies for the first decades of its existence. But sadly, for the last generation, American Studies—beset by a nagging awareness that making interdisciplinarity the norm when studying culture became mission accomplished at least 20 years ago—has scooted pell-mell towards politicization in a misbegotten effort to remain relevant.

The result today is an academic sub-specialty wedded to a tightly-corseted belief that the United States represents the locus of sin (racism, sexism, colonialism, and the like) in the modern world, and that any study of America should restrict itself to call-outs and condemnations. American Studies now serves chiefly as validation system for academicians who know their findings in advance: racism, sexism, and imperialism.

Increasingly, the field is hostile to scholars who don’t want to use it just to berate American traditions and signal their imagined virtue.

That trend reached a new low in 2013. At its national conference, the American Studies Association voted to boycott Israeli academic institutions. Wrapped in rhetoric about replying to calls from “Palestinian civil society,” the boycott’s cynical core was revealed when president Curtis Marez, asked why Israel was singled out, flippantly replied, “One has to start somewhere.” Out of 200 or so nations, precisely one was hereafter infra dig at the ASA.

Several in attendance spoke up in opposition, but they were outnumbered on the speakers roster by about 10 to 1. I was among them, and am a plaintiff in a lawsuit claiming that the boycott violates the association’s mission and voids its tax exemption. Two of my co-plaintiffs explain the suit in this piece. (The case has yet to be heard.)

It was not always thus. American Studies used to revel in wide-open exploration of the nation and cultures that constitute its subject. A look at the field’s precipitous decline from bright beginnings to its current state reveals that American Studies has journeyed from inquiry to inquisition, from multiplicity to uniformity.

Pioneers like Vernon Parrington, who won the 1928 Pulitzer Prize for his book Main Currents in American Thought, and Perry Miller, who sought the wellspring of American identity in Puritan New England, drove the thematic, interdisciplinary approach that was the initial American Studies hallmark.

The first doctorate in “American Civilization” went to Harvard’s Henry Nash Smith in 1940. His dissertation became Virgin Land: The American West as Symbol and Myth (1950), which merrily relied upon dime novels to locate a mistaken but powerful belief among settlers that North America was empty, supine, and fertile, awaiting their ploughs.

Smith’s approach—often summed up as “Symbol and Myth”—gave rise to the field’s early reputation as “history with novels.” A host of interpretive books such as John William Ward’s Andrew Jackson: Symbol for an Age (1953) continued the vogue for all-encompassing accounts of why the United States was the way it was. Theirs was a search for knowledge, not for villains to blame.

Things began changing at a 1967 conference, when rising scholar Bruce Kuklick rang the tocsin when he delivered a paper challenging the supremacy of Symbol and Myth. A host of fresh scholars put their own mark upon the rapidly growing field. Popular culture studies arose, folklore studies too.

The major alteration, however, was an opening up to sources and scholars hitherto left out. Women scholars asked why female-authored texts were so sparse on syllabi; African-American scholars reminded everyone of the centrality of the black experience, including but not limited to slavery, to the entire American enterprise. Other groups inspired American Studies students of all descriptions to work towards what might be best remembered as The Great Opening Up.

But this was also the time when deconstructionism, having washed up on American shores in the late 1960s, went mainstream. That led to questioning of the field’s name and mission. “American” sounded nationalistic. American Studies power-brokers tried to convince themselves that the United States was disintegrating on the wrong side of history. But since world events didn’t unfold that way, they decided they could at least use their field for the purpose of perpetual indictment.

The acme of this phase came at the 2012 ASA meeting in Puerto Rico. There, at the Caribe Hilton—birthplace of the pina colada, for those interested in old-fashioned American Studies subjects—president Matthew Jacobson delivered his address entitled “Where We Stand: U.S. Empire at Street Level and in the Archive.” His message was clear: American Studies was now about finding fault with America, not understanding its culture.

In the movie Z, the 1969 thriller by Greco-French director Costa Gavras, a character advises, “You should always blame the Americans, even when you think you’re wrong. They know you’re right.” Today, the dominant approach of American Studies is as simple as that.

Politician Francois Fillon recently spoke of his own country when he said, “France is not a sum of communities. It is an identity.” I think that holds for the United States as well, but don’t expect the ASA to heed this French thinker. If the United States cannot be ignored or redefined out of existence, then it must be denounced, again and again. That’s dreary, pointless, and a path to academic oblivion.

Charles Kupfer is Associate Professor of American Studies and History at Penn State Harrisburg. He received a Ph.D. from the University of Texas in 1998 and is the author of three books.

This article was republished with permission from the James G. Martin Center for Academic Renewal.