The Powerful Messages of Christmas Carols 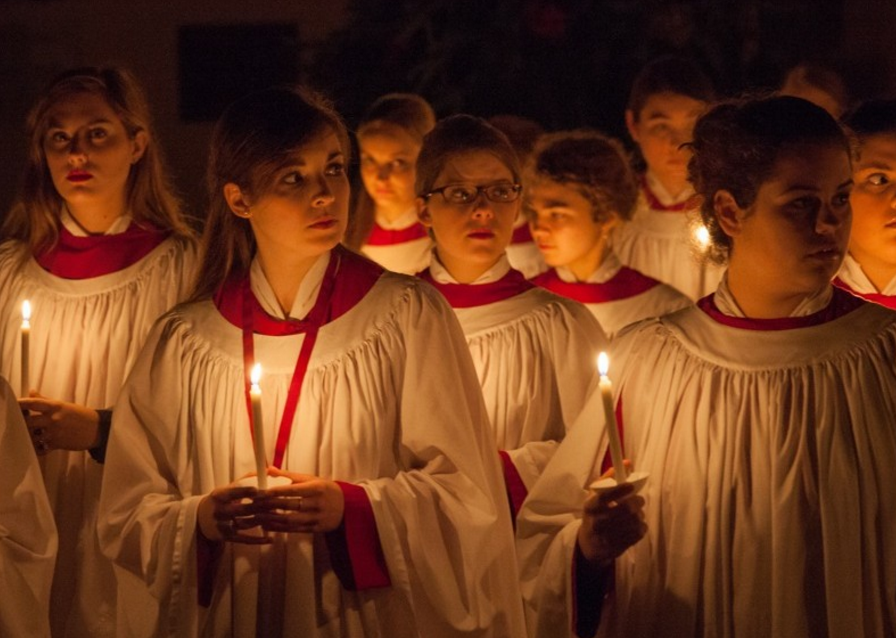 This is the time of year when we hear Christmas music on the radio, in the mall, and in school concerts.  Unfortunately, attempts to meet the mandates of political correctness have resulted in less air time for traditional selections.  “Away in a Manger” and “It Came Upon a Midnight Clear” have been replaced by such insipid fare as “Grandma Got Run Over by a Reindeer” or festive but somewhat meaningless songs such as “Rocking Around the Christmas Tree.”  While cultural literacy wanes for some, others know that powerful messages can be found in the old favorites.

At a very basic level, even the most common lyrics can prompt semantic discussions.  For example: is it “God rest ye, merry gentlemen” or God rest ye merry, gentlemen?”  With a simple move of the comma the former indicates that the gentlemen are happy, while the latter implies that it is the “rest” that is joyful.  A more profound discussion can arise from the lyrics in the first verse of Silent Night: “Round yon virgin, mother and child.”  By one interpretation these words could refer to two people—“mother and child” – but on a deeper level they can also be seen as a description of Mary and the divine nature of Jesus’ conception:  Mary herself was both “mother and child.”

Christmas carols also often contain sentiments that reveal their historical context.  For example, O Holy Night was written in 1847 as the abolitionist movement was growing, and in the third verse proclaims: “Chains shall He break, for the slave is our brother, and in His name all oppression shall cease.”

Other carols are biographical in nature.  Good King Wenceslas is based upon a historical figure that ruled Bohemia in the tenth century and conveys how this virtuous ruler risked a bitter winter storm to rescue an impoverished peasant.  The king was accompanied on his mission by a young servant who begins to succumb to the elements:  “Sire, the night is darker now/and the wind blows stronger./Fails, my heart, I know not how, I can go no longer.”

The good king tells his servant to proceed in the snowy ground by stepping into his footsteps:  “Mark my footsteps, my good page;/tread thou in them boldly./Thou shalt find the winter’s rage/ freeze thy blood less coldly.”  The imagery is clear:  The king is lifting his servant’s burden by breaking a path for him.  On one hand, the carol presents a lesson on caring for the poor; however, on a higher plane it hearkens to another King who will help us on life’s journey if we tread in His footsteps.

Another carol influenced by biographical events is I Heard the Bells on Christmas Day.  After losing his wife in a tragic accident in 1861, Henry Wadsworth Longfellow fell into a deep despair.  His journal entries on Christmas Day that year and the next expressed his profound sadness: “How inexplicably sad are all holidays,” and “A ‘merry Christmas’ say the children, but there is no more for me.”  Then in 1863, Longfellow’s son was seriously wounded during a Civil War battle.  That year, his journal is altogether silent on Christmas day.

However, on December 24, 1864, Longfellow wrote a poem that stirs the heart.  Set to music in 1872, his words describe the intense despondency that had consumed him for years:  “And in despair I bowed my head./There is no ‘peace on earth’ I said./For hate is storm and mocks the song/of peace on earth, goodwill to men.”

But these sentiments that grew from his personal tragedies are followed in the next verse with words that celebrate his victory over hopelessness:  “Then pealed the bells more loud and deep:/ ‘God is not dead nor does He sleep.’/The wrong shall fail, the right prevail,/with peace on earth, goodwill to men.”  This is a powerful message of hope over despair, of faith over doubt.  Longfellow shows a renewed belief that good will ultimately triumph over evil and that his faith has been restored.

Another Christmas favorite, White Christmas, was written by Irving Berlin in 1940 and released in December of 1942.  American sailors, soldiers, and Marines were stationed across the globe, and the song seemed to embody their longing to be home for the holidays.  “I’m dreaming of a white Christmas, just like the ones I used to know.”  That these words were penned by a Jewish immigrant shows how Christmas can be recognized and acknowledged as both a religious holy day and a secular holiday.

While Christmas carols are traditionally sung this time of year, the messages their lyrics convey are timeless.  After undergoing a transformation of his heart, the perennial Christmas villain Ebenezer Scrooge, appearing in the aptly named A Christmas Carol, proclaims:  “I will honor Christmas in my heart and try to keep it all the year.”  And to echo the words of Dickens’ narrator as he closes the text:  “May that be truly said of us, and all of us!”