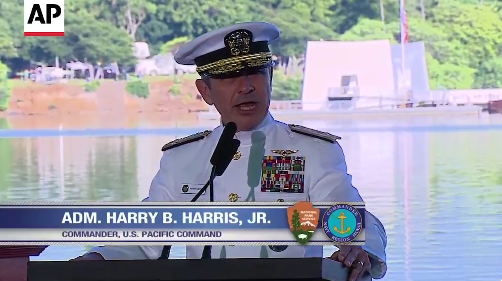 Colin Kaepernick had a tough day in Chicago on Sunday. His week is not getting any better.

On Wednesday, at a ceremony in Hawaii to commemorate the 75th anniversary of the attack on Pearl Harbor, the San Francisco 49ers quarterback found his conduct in the crosshairs of U.S. Pacific Command Commander Adm. Harry Harris.

“You can bet that the men and women we honor today – and those who died that fateful morning 75 years ago – never took a knee and never failed to stand whenever they heard our national anthem being played,” Harris said, according to the Associated Press.

That comment was enough to elicit a standing ovation and applause that lasted nearly a minute (see below).

US admiral: Those honored at Pearl Harbor 75th anniversary “never took a knee” when they heard national anthem http://apne.ws/2hhE0lf pic.twitter.com/XzYZlB67BF

Kaepernick, who began the NFL season by refusing to stand for the National Anthem, finds himself at the heart of the culture war in America. He has become a bellwether of sorts, a symbol that signals whether one believes the United States is primarily a good nation or primarily a bad nation.

My gripe with Kaepernick is that it’s difficult to see precisely what he’s trying to achieve. To my knowledge, he has not put forth any specific or tangible goals. He just wants “change.” He’s against racial, social, and economic oppression in general. (Who’s not?)

The vagueness of his protest practically ensures its continuity. That’s a shame, because it doesn’t really serve anyone—neither him, the nation, nor his cause.

Kaepernick, in my humble opinion, should give this up. He has made his point; prolonging the protest only divides people further and lends ammo to people who believe Kaepernick’s motives are self-serving.

As I said when this first started, he should do a ride-along with police, make a genuine effort to see things from their perspective. Then, perhaps, he can begin to persuade people to see his.

If he can pull that off, he just might become a symbol of healing and unity, not merely one of division and resentment. Then he can make real change. Wouldn’t that be something?