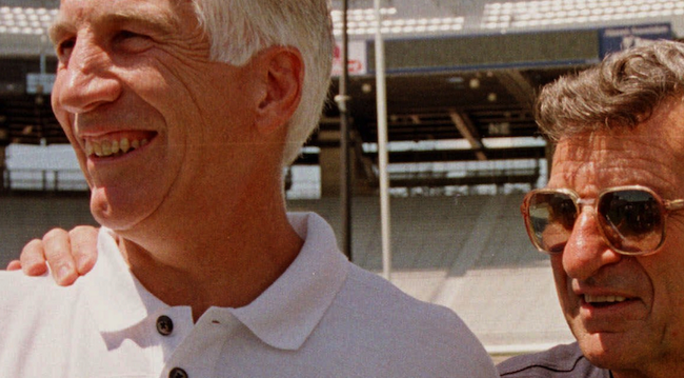 The title of this essay offers news that is untrue. It satirizes the truth in order to make a critical point.

Recently the Paterno Fellows Program announced an essay contest on ethical values, which is open to all Penn State University students. The program is named in honor of Joe Paterno, who was an English major at *Brown University before he became the renowned Penn State football coach with the most wins in NCAA history.

Until the Sandusky child sex abuse scandal, Paterno was nothing less than a god-like figure in Pennsylvania. However, when his graduate assistant Mike McQueary (who recently won a $7.3 million judgment against Penn State) informed him in 2001 that he had witnessed former assistant coach Jerry Sandusky raping a child in the gym showers, Paterno failed to report the incident to the police and child welfare services. Evidence would later surface that he knew about Sandusky’s molestation of children as early as the 1970s.

In 2011, Paterno was fired for not telling authorities about the child rape and died of lung cancer only two months later. In that time the NCAA vacated 111 of his wins, students protested his dismissal, throwing rocks, tearing down signs and overturning a news van in the streets of State College, and the university removed his statue outside Beaver Stadium.

Although Paterno’s fall from grace is tragic and many Penn State fans believe that it is undeserved, his legacy has not been lost or ruined. The library at Penn State’s main campus is still named after him. So is a flavor of Penn State Creamery’s ice cream: Paterno Peach. The Paterno Fellows Program also preserves his name and memory. But to conduct a student essay contest on ethical values, sponsored by the Paterno Fellows program, reaches the height of absurdity and hypocrisy.

Holding the actual essay contest would be like conducting a similar competition to write the best essay on child welfare, instead sponsored by the Sandusky Fellows Program. Unfortunately the members of the real Sandusky Fellows program were 8 to 12-year-old at-risk boys whom Sandusky recruited, usually from broken homes, to participate in the activities of his Charity, The Second Mile. Of course it was all a front for Sandusky to build trust, invade boundaries and sexually exploit the young victims.

On Nov. 4, 2011, a grand jury convicted Sandusky on 40 counts of sex crimes. Penn State or Paterno Truthers have repeatedly tried to intimidate those of us who write and discuss Paterno’s involvement in the Sandusky scandal. Many of these Truthers are influential members of the alumni association who pressure university administrators to hold events, name programs and build statues in Paterno’s honor, hoping to recover his good name.

While not as morally bankrupt as Sandusky, Paterno was still to blame for turning a blind eye and permitting the child rapes to occur over the course of some 30 years. What should not be forgotten in all this is Sandusky’s victims and how they would perceive a campaign to salvage Paterno’s legacy. While the wealthy Paterno family and supportive Penn State alumni can afford to spend large sums of money pushing their message that Paterno was a great man framed by the system, the victims do not have the resources to mount a similar campaign. They are left to wonder why anyone would connect Paterno’s name with an essay contest on ethical values when all the facts point to the conclusion that he failed to act as a dutiful moral agent.

[Editor’s Note: This article originally stated Paterno attended Columbia University. The article has been updated to reflect he went to Brown.]