The 7 Deadly Sins of Social Media 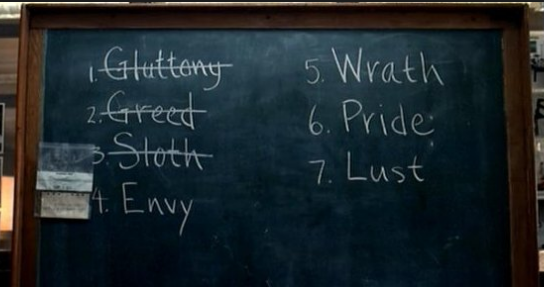 Social networks do best when they tap into one of the seven deadly sins. Facebook is ego. Zynga is sloth. LinkedIn is greed. ~ Reid Hoffman, co-founder of LinkedIn (2011)

The Atlantic’s Robinson Meyer suggests that Hoffman’s tongue-in-cheek comment from five years ago may contain more than a kernel of truth. Using Dante’s Inferno as a guide, Meyer outlines how several social networks and Internet platforms tap into some of the darker aspects of our nature.

These sins are more than their stereotypes. For example, when people think of gluttony, they often imagine someone who eats too much. But, gluttony is not just about gorging; it is about trying to find satisfaction in something that will never deliver. So the person perpetually consumes, whether it is food or shopping or something else, but is never truly satisfied. Meyer gives the example of Tantalus in the Inferno who is stuck in a pool where he can never quite reach the branches of fruit above him.  Meyer says that gluttony is Instagram.

Ultimately, the seven deadly sins are various types of idolatry. Acedia is a special case. It is related to sloth, but is much deeper. It is related to ennui or a deep malaise regarding life. In terms of idolatry, it is being tired of worshiping whatever you have been worshiping, whether it was God or some other idol. It is the state of idol-shopping as a way to cure one’s malaise. Known as the “noonday devil” in monastic circles, Meyer says the “the afternoon Internet” (e.g., Tumblr and deep You Tube) represent acedia.

His other categories: Tinder is lust. LinkedIn represents greed. Netflix is sloth. Twitter taps into wrath (and its twin, sullenness or bitterness). Pinterest evokes envy. Medium touches on pride. Facebook is vanity.

While the “sinfulness” of certain social networks may attract certain people to their sites, many people stay because they have become inextricably habituated to the app or the website. In other words, a person becomes addicted. Studies have shown that social media addiction is quite real and includes dopamine-induced highs and physiological withdrawal. Many addicts suffer from anxiety when they try to stop, and many go back even after finding freedom following a “social media detox”. Before we cast blame on the addict for indulging in his social media drug of choice, we shouldn’t overlook the fact that social media and app designers intentionally make their products addictive.

Some people like to say that technology is morally neutral. That is true to a point, but technology is made by moral agents who design it with a purpose in mind. And, just as the pharmaceutical industry is coming under fire for cultivating a painkiller epidemic, Tristan Harris, a Stanford grad and founder of Time Well Spent, says app designers and social media companies should be held responsible for knowingly making an addictive product. He calls for a Hippocratic Oath for technology.

In an article entitled “How Technology Hijacks People’s Minds—from a Magician and Google’s Design Ethicist”, Harris gives several examples of how social media sites and app designers use psychological manipulation techniques to get their users addicted. For example, social media sites like to use the “bottomless bowl” idea to get people to stay on the site longer. Studies have shown that people who are given a bottomless bowl of soup that is constantly re-filled will unknowingly eat 73 percent more calories than if they had a finite bowl of soup. This is the impetus behind the never-ending news feed on sites such as Facebook, Twitter, LinkedIn, and Instagram. Because you are never done, you end up spending more time on the site.

App designers, taking their cues from the gambling industry, will use intermittent variable rewards to get the user to check the app incessantly. Or, as Harris says, they “put a slot machine in your pocket.” The idea is that you click on the app and see if anyone responded to your picture, post, email, etc. Because updates are intermittent or are real-time, sometimes you get a response and sometimes you don’t. When you do get a response, you’ve received the dopamine hit (the jackpot), but it is fleeting, so you keep coming back for more. Sites like Facebook do this intentionally by providing a red notification that you have to click (i.e., pull the lever) to see what you get. Others applications, like email, were not designed to do this, but are often used this way.

Apps do not have to do this. They could download the information once-per-day, rather than in real-time, so the user can schedule when he will address his messages. Email clients could have settings that provide alerts when a user had checked his mail for the third time in the same hour. These would not be difficult features to include in any of these apps, and they would respect the user as a person rather than a product.

People who have tried to go on social media fasts report that they are afraid they will miss something. Many of these apps intentionally cultivate this fear. Facebook sends emails when your activity has decreased, letting you know that you are missing something without telling you exactly what it is. Facebook provides a button in your email so you can check what you missed, at which point you are taken to the endless news feed page where you will spend (on average) twenty minutes scrolling.

Harris lists 10 ways that social media and app designers tap into users’ vulnerabilities in order to keep you coming back. His article is worth reading in its entirety, here. If Meyer gave us the seven deadly sins of social networks that hook the user in, Harris gives us the ten commandments of user addiction.

Apps and social networks become addictive because they come very close to meeting a deep need without quite meeting it. Entire books are dedicated analyzing what exactly we’re looking for in our Internet use, such as Sherry Turkel’s Alone Together: Why We Expect More from Technology and Less from Each Other. Perhaps we can summarize it as window shopping for meaning.

Several studies have found correlations between social media use and depression. One studyfrom Germany found that one-in-three people felt worse after getting on Facebook, and those that scrolled through the news feed without interacting felt the worst.

Another study showed that Pinterest increases stress among users, who are disproportionately women, because it makes them feel inadequate. Yet, these same women will forego sleep, spending hours looking for just the right thing on the style-trending site.

Perhaps the underlying problem is that our culture has lost a common notion of human flourishing. Our purpose in life becomes the pursuit of some vague notion of happiness that has been stripped of any meaning. This means we don’t really know what we are looking for, so we look at others to see if they have figured it out. And, when others look like they are happier than we are, we are left feeling like a failure and miserably envious of everyone else who is desperately trying to craft their happy image on social media.

Yes, the seven deadly sins are thriving, even if we are not.

Heather Zeiger is a freelance science writer with advanced degrees in chemistry and bioethics. She writes on the intersection of science, culture, and technology.