Justice Clarence Thomas On Why Our Government is ‘Broken’ 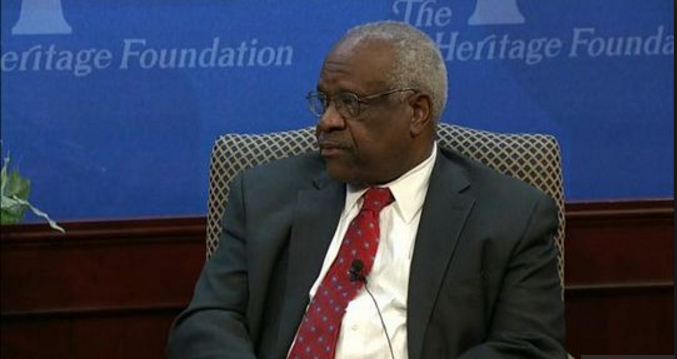 Justice Clarence Thomas has earned a reputation for saying very little on the Supreme Court bench. He made an exception on Wednesday evening at an event hosted by the Heritage Foundation.

Thomas, who was confirmed in 1991 after a messy confirmation, described Washington, D.C, as a ‘broken’ place:

[T]his city is broken in some ways. I’ve been here most of my life now. I think we’ve become very comfortable with not thinking things through….I think we have decided rather than confront the disagreements and the differences of opinion, we’ll just simply annihilate the person who disagrees. I don’t think that’s going to work. I don’t think that’s going to work in a republic or a civil society.

Thomas is getting at something important. Rational, civil debate is no longer happening in our society, Thomas implies. He is not alone in this observation.

Philosopher Alasdair MacIntyre wrote of a similar problem in chapter 2 of his famous work After Virtue, published a decade before Thomas took his seat on the bench. Here is what he wrote:

The most striking feature of contemporary moral utterance is that so much of it is used to express disagreements…. I do not mean by this just that such debates go on and on and on – although they do – but also that they apparently can find no terminus. There seems to be no rational way of securing moral agreement in our culture.

What do people do when they argue and argue but can’t agree on anything? They get angry. They lash out. They attack the person with whom they disagree.

Our nation’s capitol is not broken because we lack ideas. It’s broken because our ideas are so very different, as are the premises that undergird those ideas.

Progressives see themselves breaking free of an oppressive culture. Thomas sees things differently. “At some point, we are going to have to recognize that we are destroying our institutions,” he says at one point.

This, I think, explains the collapse of civil discourse and rational debate to which Thomas referred. Not for the first time in our nation’s history, people have dreams of building very different worlds.

Is Thomas right? Are Americans suffering from an inability to communicate and debate in a civil manner? And if so, what does that mean for our nation’s future?