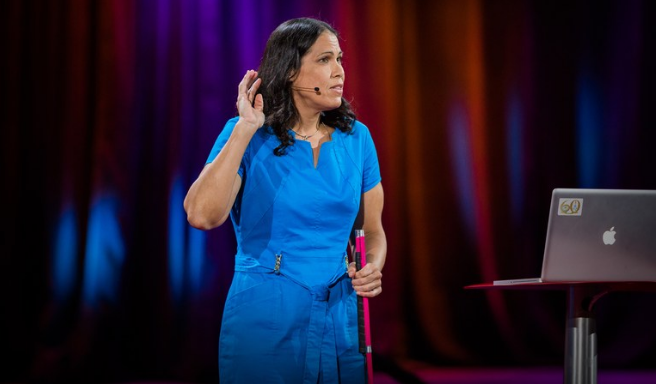 As a person who regularly gazes up into the darkness of night, musing over the millions of tiny, bright stars that flicker in the sky, losing my eyesight would easily be one of the most tragic things to happen to me.

A Puerto Rican astrophysicist named Wanda Diaz Merced grew up dreaming about traveling to the stars. She wanted to become an astronaut, and frequently told her family she was going to transform her sister’s bed into a spaceship.

But, Wanda’s dreams would be cut short unexpectedly.

Wanda studied astrophysics as a student in her early 20s. She suffered from an illness for quite sometime that would eventually take her eyesight from her. No longer could Wanda look up and gaze at the stars she had held so precious to her. And no longer could she study the data that those stars gave her.

So, what better way to turn tragedy into opportunity than by figuring out a creative way to overcome the gap between her lack of vision and her need to study data. Wanda decided to find a way to translate batches of data, from supernovae and solar flares, into sound bytes.

Wanda now listens to the stars as they speak to her, a unique method that not only assists disabled scientists, but also opens up an entirely new realm of discovery. Using the numbers gained from supernovae and solar flares, Wanda listens closely as pitches go either up or down to represent different levels of intensity.

Currently a postdoctoral fellow at the South African Astronomical Observatory in Cape Town, Wanda makes the argument that hearing sets of data can help scientists recognize different patterns and phenomena that the human eye could pass over.

“The eye… is really limited, and we are only depending on our eyes right now,” she said in an interview.

“When we synchronize our different ways of perceiving the world, our sensitivity to events that are masked to the eye… increases exponentially.”

Something that is still quite emotional for Wanda is the Milky Way. She remembers its beautifully dusty path, arcing through the black Puerto Rican sky. Now, she only listens to it.

“When I hear that, I just feel like dancing or starting to clap.”