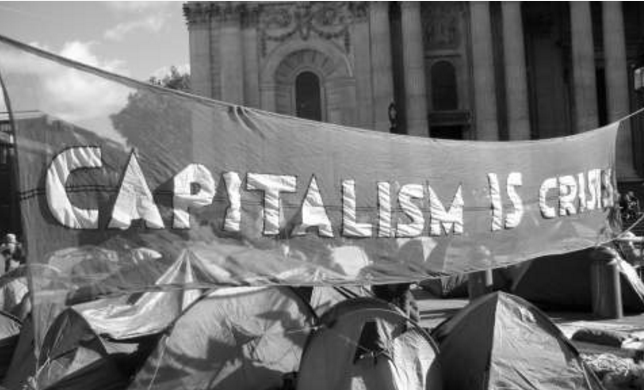 Students of sociology at Indiana University-Purdue University Fort Wayne are receiving a rather banal message on economics: capitalism is evil.

“The basic tenet of capitalism—who gets what is determined by private profit rather than by collective need—explains the persistence of poverty. The primacy of maximizing profit works to promote poverty in several ways. First, employers are constrained to pay their workers the least possible in wages and benefits. Only a portion of the wealth created by the laborers is distributed to them; the rest goes to the owners for investment and profit. Therefore, employers must keep wages low. That they are successful is demonstrated by the more than 2.8 million people who worked full-time in 2012 but remained under the poverty level.”

The passage appears in a textbook entitled In Conflict and Order: Understanding Society, which can be purchased on Amazon for just $150 ($30 off its list price!). The text is assigned reading for a Principles of Sociology class (S161) taught by one Robert Pettit, a professor who is rated highly on Rate My Professor.

The passage is just one of several factually dubious assertions found in the book, the subject of a recent Campus Reform investigation.

It’s no secret that Marxist theory is widely taught in American educational systems. This should not be a cause of concern. One could argue that no modern thinker has shaped our world more than Karl Marx; as such, his political and economic theories deserve study and scrutiny.

But Marxism is a theory, and the theory need not be introduced in all courses of study. I’m reminded of Jacques Barzun, who in From Dawn to Decadence wrote on the wave of Marxism that spread across European universities during the 1920s and 1930s. It was omnipresent. One “could not be educated if ignorant of the doctrine.” As one cheeky skeptic remarked, “The Communist Manifesto is assigned reading in every course except Hygiene.”

In the case of In Conflict and Order, the text offers a clearly Marxist message that contains at least one falsehood (there is no constraining force that requires employers to pay workers “the least possible in wages and benefits”) and is presented as fact. The premise of that passage—capitalism causes poverty—is very much a debatable one, as Steven Horwitz evidenced on this site.

But reviews of the book on Amazon show that some students also had problems with the text. Via one Charles Campbell:

This is pure propaganda. As someone mentioned below, there are many wholly inaccurate claims in this book that go off on tangents which cite no sources. Also, this book goes on to assert appalling claims like American exceptionalism has “racist overtones” and that capitalism is to blame for “the persistence of poverty.” Not to mention, the authors assert that American values such as “competition,” “work,” “progress,” and “individual freedom” are detrimental to society.

And one Lizz A. Belle:

I was assigned this book for my intro to sociology class and I find it to be a lot of blustering with inaccurate information given the price.

The book discusses the dualities of conflict and order in society, though you only need to read a few chapters in to realize the book is nearly completely biased to the conflict paradigm. They also like to reference themselves throughout the book but on certain “historical facts” and “observations” there are no citations as to where they obtained this erroneous information.…

If you have any knowledge of American history and/or politics, I think you will be disgusted you wasted $122.00 to buy this.

Will students continue to pay small fortunes for subpar educations that increasingly seem designed to tell students what to think instead of teaching them how to think?