What the New Pagans and Christians Have in Common 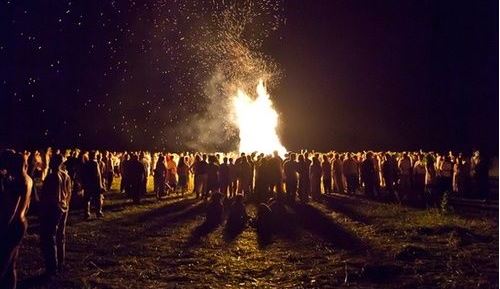 Today is the Fall Equinox, and it is being welcomed by some throwback pagan celebrations.

It has become commonplace among many Christians to quickly denounce these neo-pagan rituals and the people who participate in them. They see the increasing visibility of paganism as a fruit of secularism and a sign that the West is descending further into cultural darkness.

But sometimes I wonder if this paganism—in some of its manifestations—has more in common with ancient Christianity than with many the whittled-down and demythologized versions of Christianity that are known as “mainstream”.

Off the top of my head, I can think of at least three major principles that traditional Christianity and paganism, broadly speaking, share in common:

1) A recognition of the importance of ritual.

According to the noted scholar and priest Alexander Schmemann, man is fundamentally a “worshipping being” who longs to participate in mysterious rituals that have prescribed words, actions, elements, and traditions. Many forms of Christianity today, however, have dumped the old rituals in favor of ad hoc worship “services” devoid of much in the way of aesthetics and often meant to entertain. For some, neo-paganism fills the void of ritual in our time that is left unfulfilled in many Christian churches.

2) A holistic view of life.

Pagans today emphasize both the body and the spirit—that the former affects the latter, and vice versa—and strive to have their beliefs inform the various spheres of their lives, such as work, food, health etc. Traditional Christianity affirms that in the Incarnation, God, who is Spirit, became “flesh,” and deified all of human life and creation. Thus, there is no aspect of one’s human existence that is not touched by both the bodily and the spiritual, by both the human and the divine. Many Christians today, however, tend to keep the religious separate from other aspects of their lives, and a philosophical materialism heavily influences their views of such things as food and health.

3) A reverence for creation.

The term “pagan” comes from the Latin word for “peasant, villager, rustic.” In part, the reason for the term was that it was typically those who maintained a closer connection to the land that held on to the pantheistic forms of paganism one sees making a resurgence today. Though traditional Christianity is opposed to pantheism, it does recognize that creation bears the marks of its Creator, and thus deserves the utmost reverence. On the other hand, certain Protestant forms of Christianity emphasized the fallenness of creation, and this contributed to the spread of a more utilitarian view of the world.

In the period of the early Church, some Christian theologians referred to those truths recognized and lived out by pagan cultures as a preparatio evangelica—“a preparation for the Gospel.” Who knows? Neo-paganism may end up serving a similar function… Today’s pagans may end up being tomorrow’s Christians.