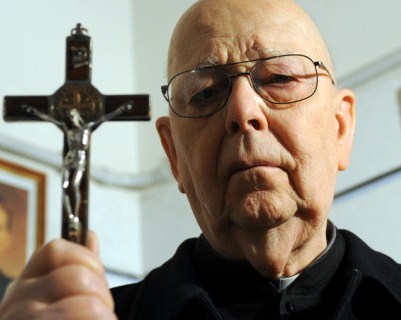 Even in today’s more secular society—or perhaps because we live in a secular society—the Catholic rite of exorcism still manages to attract a good amount of intrigue and curiosity. Witness, for instance, the success of the movie The Exorcist (1973), which was one of the most profitable horror movies of all time.

Catholic priest Fr. Gabriele Amorth is known as the “Chief Exorcist of Rome.” He has an office in the Vatican, and reports that he has performed upwards of 160,000 exorcisms in his lifetime.

In his 1990 book titled An Exorcist Tells His Story, he recounted some of his experiences during exorcisms. Here are a few selections:

“Demons are very reluctant to speak. The Ritual, very rightly, admonishes the exorcist not to ask questions out of curiosity, but to ask only what is useful for liberation. The first thing that must be asked is the name. For the demon, who is so reluctant to reveal himself, revealing himself is a defeat; even when he has revealed his name, he is always reluctant to repeat it, even during following exorcisms. Then we command the evil one to tell how many demons are present in a particular body. There can be many or few, but there is always one chief, and he is always the first to be named. When the demon has a biblical name or one given in tradition (for example, Satan, Beelzebub, Lucifer, Zebulun, Meridian, Asmodeus), we are dealing with ‘heavyweights’, tougher to defeat. The degree of difficulty is also relative to the intensity with which the demon possesses a person. When several demons are present, the chief is always the last to leave.

In cases of strong possession the demon might speak voluntarily to discourage the exorcist. Many times I was told, ‘You cannot do anything against me!’ ‘This is my home; I am happy here, and here I will stay.’ ‘You are wasting your time.’ Other times I was threatened: ‘I will eat your heart!’ ‘Tonight I will frighten you so much that you will not be able to close your eyes.’ ‘I will come into your bed like a snake.’

The exorcist is always able to find a particularly weak spot. Some demons cannot bear to have the Sign of the Cross traced with a stole on an aching part of the body; some cannot stand a puff of breath on the face; others resist with all their strength against blessing with holy water.

Many times I have been approached by people… who questioned whether a loved one was under the influence of a demon… Blessed water is [a] test. For example, a mother who suspects an evil presence in a son or husband uses blessed water to cook some soup or to brew coffee or tea. Often the affected person finds that particular food bitter and inedible, without understanding why.

Superhuman strength can also be a sign of diabolic possession… A person possessed by demons cannot be immobilized; he can even break iron chains… Father Candido [his mentor] told me of a thin, apparently weak girl who had to be subdued by force by four strong men during exorcisms. She broke every bond, even some heavy leather straps with which they tried to tie her down. Once, when she was tied with strong ropes to an iron bed, she broke some of the iron rods and folded others at a right angle.”

By the way, here’s Fr. Amorth’s take on the movie The Exorcist: “Of course, the special effects are exaggerated. but it is a good film, and substantially exact, based on a respectable novel which mirrored a true story.”