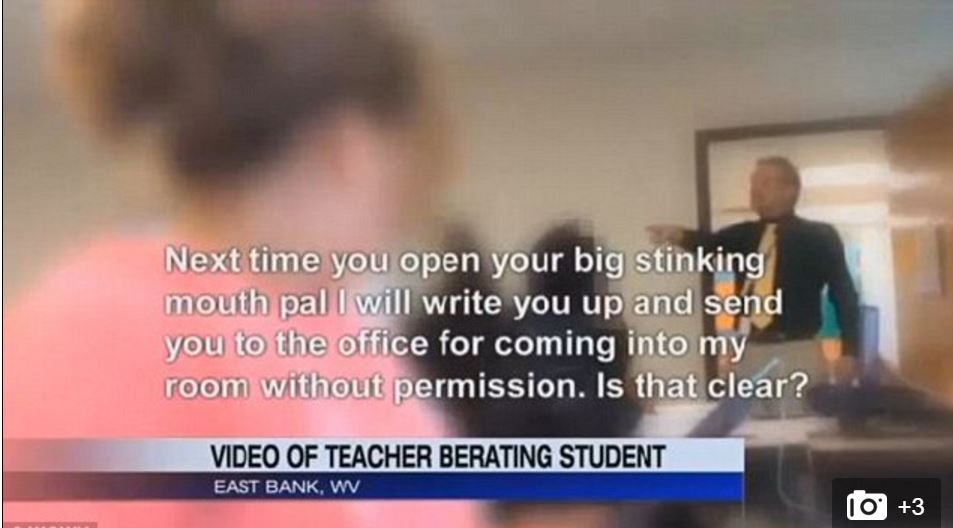 Via WOWK-TV, a CBS affiliate out of Charleston, West Virginia:

A video that shows an East Bank Middle School teacher berating a student was emailed in to 13 News to be investigated.

13-year-old Jeffrey Province says he was the first student into his math class at East Bank Middle School on Tuesday when he observed his teacher, Thomas Yohn, looking at his computer.

“I saw something no 13-year-old should ever see in a school,” said Jeffrey Province, a 6th grade student at East Bank Middle School.

From there, Jeffrey says that he went to his school principal with the information.

Now, it’s unclear precisely what the student saw, but from the reaction of the West Virginia middle school teacher, we can gather a few clues:

Reports indicate that the video, taken by a student during class, was shot after Province reported to the principal that he had seen Yohn watching inappropriate content. This did not sit well with his teacher, who interrupted another class to berate the student.

“What I watch as an adult is my choice,” Yohn says. “You as a child wait in the hall until you’re invited into my room. Is that clear?”

In the video, Yohn claims Province attempted to blackmail him by saying he would tell school officials that Yohn was “watching inappropriate things on TV and I saw it” if he did not give Province an A in the class.

Yohn, perhaps in a bluff attempt, apparently told Province to tell whomever he liked. He seemed to have a change of heart, however, when Province followed through on his threat.

“Now I’m telling you to keep your big flap shut,” Yohn can be heard saying in the video. “Because I’m a grown-up and can watch whatever I want.”

Where to begin? Let’s face it: Yohn has likely been tried and found guilty by the vast majority of people who have seen this story. In the (undoubtedly surreptitiously shot) video, he appears not just angry, but highly defensive. Many people will take that as an indication of his guilt.

Before Yohn, who has already deleted his Twitter account and removed his picture from LinkedIn, is convicted in the court of public opinion, a few things to consider:

So, all things considered, we should probably for now lay off with the oh-so-clever puns and double entendres, tempting as they may be (see below).

As we wait for more facts to come in, it’s worth taking a moment to look at what is probably going unnoticed. Am I wrong, or is the lack of order in the classroom not stunning?

Yohn barges into the room (a class he is not teaching, mind you) and begins yelling. Nobody stops him. Students have phones out and are recording during the middle of class. Students are barging in on their teachers, apparently with great frequency, and (allegedly) blackmailing them.

All of this, I must confess, seems utterly foreign to me, a Generation Xer. Our culture has apparently infused our classrooms with technology to a degree that I did not realize until now. Laptops are everywhere in the clip. And it appears that multiple students recorded Yohn’s outburst.

My question: is there any evidence that the technology has had a positive impact on our schools? This is not a rhetorical question; I’m legitimately asking. Do we want this amount of technology in our schools? Or is technology proving to be more invasive and distracting than helpful?

More pointedly, do we want students with phones in classrooms surreptitiously recording their teachers?