How the ‘New Math’ is Ruining Education 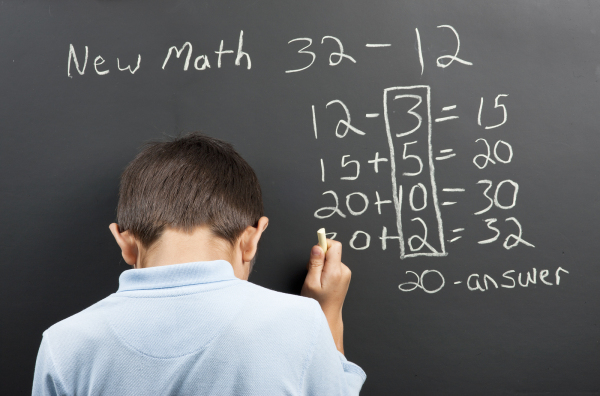 By now, you’ve probably seen some of the complaints on the internet about the “new math” being promoted by the Common Core Standards.

Many grade-school children—including, for instance, comedian Louis CK’s children—have come home with math homework that is virtually indecipherable to their parents.

The goal behind the new math, it seems, is to encourage children to not just solve their basic arithmetic problems, but to understand the concepts underlying them.

But according to a fascinating article by educator Martin Cothran titled “Why Johnny Can’t Add,” this approach is wrong-headed, and may even be causing America’s students to regress. As Cothran points out, the “old math” worked just fine, and was the basis for many innovations in the past two centuries.

As a case in point, Cothran refers to the math education of his father, an aerospace engineer who worked on top-secret projects for the military and was on some of the early space shuttle launch teams.

In the article, Cothran includes some cool anecdotes about his father, including the following three:

And where was Cothran’s father taught the math that paved the way for his career in aerospace engineering?

At a poor, one-room schoolhouse in the hills of South Carolina.

There, the students did not spend time learning why 10 + 5 = 15 or 9 – 7 = 2, and they had no fancy textbooks. According to Cothran’s father, “We just learned how to figure,” and left it at that. As was the experience of many of us, Cothran explains, “They memorized their addition and subtraction facts and their multiplication tables, and mastered long division through repeated drill and practice.” They simply memorized these things so that they would have a solid basis for the more conceptual math in later years. (And it’s interesting to note that the highest degree Cothran’s father obtained was a bachelor’s degree in ceramic engineering from Clemson University.)

[Current proficiency levels in math for the nation and selected cities as measured by the National Assessment of Educational Progress.]

Now, with the new math, young students are being made to philosophize about 1+1 rather than simply memorizing that it equals 2. But as Cothran reminds us, the “new math” isn’t that new. He includes this other anecdote of his father:

“I told my dad once about the kind of math they were doing in the early 1990s in schools in Kentucky where I lived. ‘That sounds like what they were doing in California in the 1950s,’ he said. ‘In fact, if you give me a report from one of my engineers and told me he was educated in California, I’ll tell you how old he is.’ These engineers, he said, would use computers to compute complex calculations, but would make basic mistakes that no good mathematician should make.”

Cothran argues that imposing conceptual education on basic arithmetic is not a sign of progress in education. “Arithmetic,” he writes, “is a tool—that is, a means, not an end. Arithmetic is not something you learn—it is something you should have learned.” In support of this contention, he quotes the great mathematician Alfred North Whitehead:

“It is a profoundly erroneous truism that we should cultivate the habit of thinking of what we are doing. The precise opposite is the case. Civilization advances by extending the number of important operations which we can perform without thinking about them.”

Cothran then concludes his article with this important reminder:

“The math education of my father’s day produced a whole generation of great scientists and engineers. They are the ones who sent men to the moon and who pioneered the computer revolution. They followed the great German scientists of the nineteenth century whose classical education enabled them to conduct the relativity and quantum revolutions in physics, and the development of genetics in biology.”

** I highly encourage you to read Cothran’s entire article in The Classical Teacher here. **