Family Members Are Supposed to be a Burden on Each Other 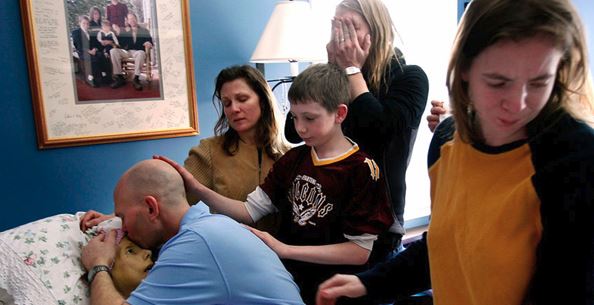 If you’re family, you burden each other. And that’s a good thing, once one understands what it means.

This past weekend, First Things posted on Facebook an article they had originally published in 1991 entitled “I Want to Burden My Loved Ones.” That sounds awful, to be sure. But it was written by one of America’s leading bioethicists, Gilbert Meilaender, whose friends (a few of whom are my friends) have nothing but the highest praise for him. So given his personal reputation as well as the importance of the subject, it’s worth inquiring why he said that.

The title refers to a thought Prof. Meilaender had while he was attending a “workshop” on “advance directives” in health care, sometimes called “living wills.” The rationale for such things is familiar:

“I’m afraid that if my children have to make decisions about my care, they won’t be able to handle the pressure. They’ll just argue with each other, and they’ll feel guilty, wondering whether they’re really doing what I would want. I don’t want to be a burden to them, and I will do whatever I can in advance to see that I’m not.” And after someone has spoken words to this effect, there will be a chorus of assent from the people who, evidently, share the speaker’s view.”

Wanting not to be a burden on one’s loved ones if you are dying, elderly, or otherwise incapable of living independently is quite natural. But it’s not the only natural desire. Another, arguably more important desire conflicts with it.

An aging or dying parent has something of a claim on his or her children. Parents make huge sacrifices for their children, and rightly so. Is it not simple justice to be repaid a bit for that when one is old and relatively helpless? Is it not natural to desire that? Meilaender thinks so, and he’s right.

But regardless of how understandable it is, that’s not exactly a noble desire. At least it doesn’t get to the heart of the matter, which is this:

“Is this not in large measure what it means to belong to a family: to burden each other—and to find, almost miraculously, that others are willing, even happy, to carry such burdens? Families would not have the significance they do for us if they did not, in fact, give us a claim upon each other. At least in this sphere of life we do not come together as autonomous individuals freely contracting with each other. We simply find ourselves thrown together and asked to share the burdens of life while learning to care for each other. We may often resent such claims on our time and energies. We did not, after all, consent to them….

It is, therefore, understandable that we sometimes chafe under these burdens. If, however, we also go on to reject them, we cease to live in the kind of moral community that deserves to be called a family. Here more than in any other sphere of life we are presented with unwanted and unexpected interruptions to our plans and projects. I do not like such interruptions any more than the next person; indeed, a little less, I rather suspect. But it is still true that morality consists in large part in learning to deal with the unwanted and unexpected interruptions to our plans. I have tried, subject to my limits and weaknesses, to teach that lesson to my children. Perhaps I will teach it best when I am a burden to them in my dying.”

That’s it. That’s what the family, as incubator of love and shaper of morality, is all about. And that’s why it’s a good thing that family members burden each other.