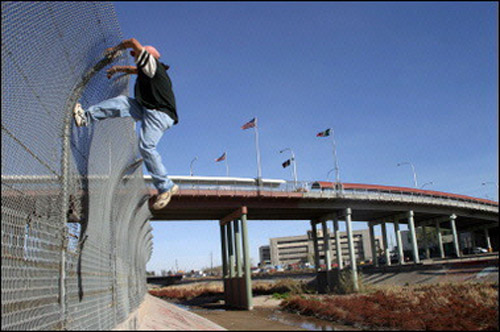 The number of Mexican migrants seized near the U.S. border plummeted in 2015, according to a report by the Pew Research Center.

Apprehensions of Mexican migrants declined to near-historic lows last fiscal year, which ended Sept. 30, 2015, according to data released earlier in the year by the U.S. Border Patrol. (U.S. border apprehension data are commonly used as an indicator of the flows of migrants entering the U.S. illegally, though they are only a partial measure.) In fiscal 2015, the Border Patrol made 188,122 apprehensions of Mexican migrants at U.S. borders, an 18% decline from the previous year – and the lowest number of apprehensions on record since 1969, when there were 159,376 apprehensions. The decline suggests unauthorized immigration flows from Mexico could be falling.

What caused the drop? It’s not a lack of Mexican emigration, which has held steady for the last five years after dropping sharply following the Great Recession (see graph below). ?

Border agents have been voicing frustration in Congressional committees about the alleged policy shifts of the Department of Homeland Security (DHS) and U.S. Customs and Border Protection (CBP) that make it more difficult to apprehend and hold immigrants attempting to enter the United States.

“Immigration laws today appear to be mere suggestions. There are little or no consequences for breaking the laws and that fact is well known in other countries,” said Brandon Judd, head of the border patrol union. “If government agencies like DHS or CBP are allowed to bypass Congress by legislating through policy, we might as well abolish our immigration laws altogether.”

It’s unclear if any official policy change at DHS has occurred, but an 18 percent drop in apprehensions is significant. Intellectual Takeout has written in the past about the increasing prominence of immigration in our political discourse.

Are we witnessing a designed shift away from border enforcement, a notion that seems to offend 21st century sensibilities? If so, is there anything wrong with taking a more passive approach?