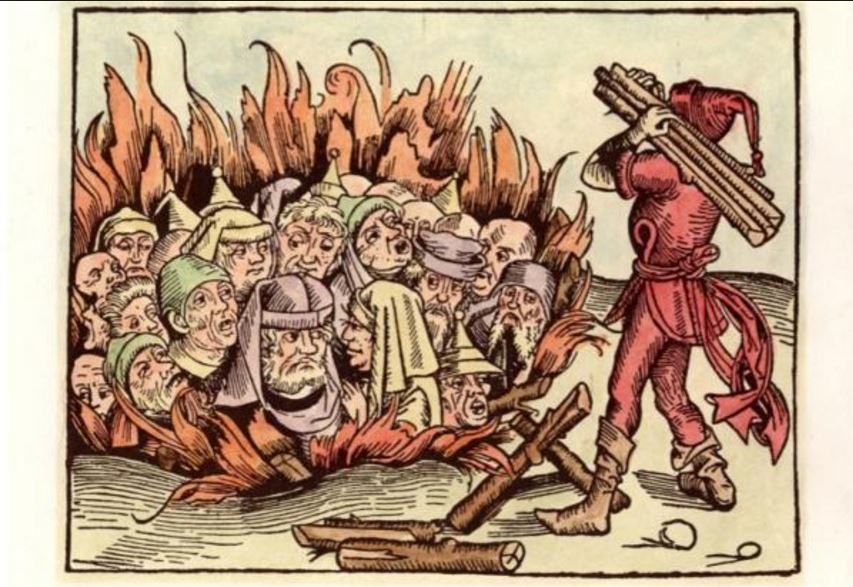 If you visit Lisbon today, in the downtown square you can find a half of a stone orb resting on a slab. Within the stone circle is the Star of David, etched with the following:

“In memory of the thousands of Jews who were victimized by intolerance and religious fanaticism, killed on the massacre that started on 19 April 1506, on this square.”

The Lisbon Massacre, also known as the 1506 Easter Slaughter, is one of the many sad stories of Jewish oppression in Europe. The event, which took place 510 years ago, offers insight into the deep religious intolerance that infected the continent during the 16th century. The event foreshadowed the religious Inquisition that would spawn in Portugal a generation later.

The seeds of the slaughter can be traced to Spain’s own Inquisition. Following Spain’s victory over Muslim forces at Granada in 1492, the Inquisition saw an opportunity to restore all of Spain to Christians. All that was required was the expulsion of some 200,000 Jews from the peninsula. The order was issued by King Ferdinand and Queen Isabella on July 30 (a fact Columbus casually notes in his diary). Jews still remaining in Spain, an estimated 50,000-80,000 people, were put on ships and removed.

There were not a lot of nations looking to take in tens of thousands of Jews. In fact, Jews had already been expelled from England, France, and parts of Germany. Nearby Portugal, a nation of a million or so people, ironically was one of the few places many Jews were able to settle. Perhaps as many as 100,000 Jews found homes there under King Manuel I.

Manuel, however, soon had a change of heart. In December 1496 he ordered all Jews out of Portugal by October the following year. He changed his mind again, however, opting instead to forcibly baptize the Jews, who became so-called New Christians (also known as Conversos).

A decade later, thousands of New Christian Jews were living in Lisbon when the city was struck by the plague. Those who could get out of the city, like King Manuel and his wife, Maria of Aragon, did so; those who could not—some of them, at least— found someone to blame: Jews. The massacre took place, of all days, on Easter.

Isaac Ibn Faradj, a New Christian who witnessed the massacre, wrote this account:

“It happened on a Christian holiday (…). It was while the King and the Queen were absent from Lisbon, the capital, on account of the plague which raged there at that time, that a priest with a cross stood up, and wicked men with him, murderers and scoundrels, and they killed more than 1,400 Jews [i.e. New Christians], and burned their bodies, men and women, pregnant women and children. They burnt them in the streets of the city for three days on end, till the bodies were consumed and became ashes. I stole from the fire one half of the burned head of a dear friend of mine, and I hid it, kept it brought it to Valona [most likely the town of Vlorë in modern-day Albania], and buried it in a Jewish burial-place.”

Historians estimate that at least 1,000 Jews were killed over those three days and perhaps as many as 4,000.

When King Manuel returned to Lisbon he had the ringleaders of the massacre hanged. Within a decade, however, Manuel would officially request the installation of an Inquisition to solidify his alliance with Spain. The request was granted in 1536 by Pope Paul III.

Five centuries later, Pope John Paul II issued an apology for what he described as a betrayal of the Christian Gospel during the second millennium:

We forgive and we ask forgiveness! . . . We cannot not recognize the betrayals of the Gospel committed by some of our brothers, especially during the second millennium. We ask forgiveness for the divisions between Christians, for the use of violence that some have resorted to in the service of truth and for the acts of dissidence and of hostility sometimes taken towards followers of other religions.

We confess to our responsibility as Christians for the sins of today. Before atheism, religious indifference, secularism, ethical relativism, to violations of the right to life, to the indifference towards the poverty of many countries, we cannot not ask ourselves what are our responsibilities.

For the part that each of us with our own behavior played in these evils, contributing to stain the face of the church, we humbly ask for forgiveness.