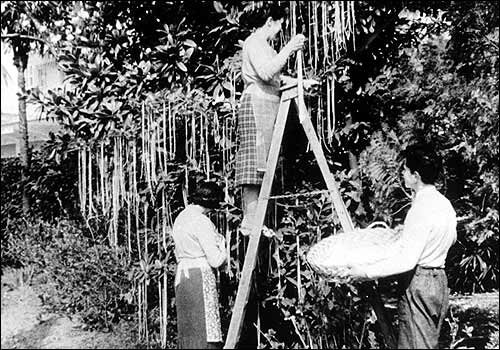 Love it or hate it, April Fools’ Day is here. In fact, Yahoo got an early start yesterday on the dubious holiday with a false report that Trader Joe’s is closing all its stores, causing bargain-hunting food lovers across the country to keen.

To get you into the “festive” spirit of the day, the Washington Post has provided us with some historical background on the tradition:

“How did we get into this mess? We asked Alex Boese, curator of the online Museum of Hoaxes. He says you can blame the Dutch (who first referenced April Fools’ in a 16th-century text) or the French (who overhauled their annual calendar in the 1500s, confusing “fools” who didn’t adapt). Or maybe the U.K., home of the first April Fools’ Day prank on record, or Germany, which popularized fake April Fools’ news stories.”

Here are 5 of history’s best April Fools’ jokes according to the Washington Post:

1. In 1698, invitations were handed out in England to see the washing of the lions at the Tower of London. There were actually lions at the time, but there was not public washing. Apparently the joke was resurrected in the 19th century when the lions were no longer around.

2. In 1905, a German newspaper convinced much of Europe that “all the silver and gold had been stolen from the U.S. Treasury, in a highly coordinated heist orchestrated by American millionaires.”

“Swiss farmers were celebrating an unusually plentiful spaghetti crop, thanks to a balmy winter and the eradication of the menacing ‘spaghetti weevil.’ The story included staged footage of workers plucking limp pasta from trees. Amazingly, a lot of people believed it, and the prank is widely considered the most successful April Fools’ Day joke of all time.”

4. In 1977, the Guardian published a 7-page supplement on the “semicolon-shaped islands of Upper Caisse and Lower Caisse in the Republic of San Seriffe,” which was “rife with droll typographical puns”. Readers were convinced and the supplement made quite a lot of money from advertisers.

5. In 1996: Taco Bell declared in a widely-published full page ad that it had purchased the Liberty Bell and were renaming it the “Taco Liberty Bell”. The national park service was flooded with angry calls.

For those inclined to despise April Fools’, perhaps an appreciation of the day’s longstanding, multi-cultural tomfoolery will help ease your woes.