A Lesson to Draw from the Orthodox-Catholic Schism 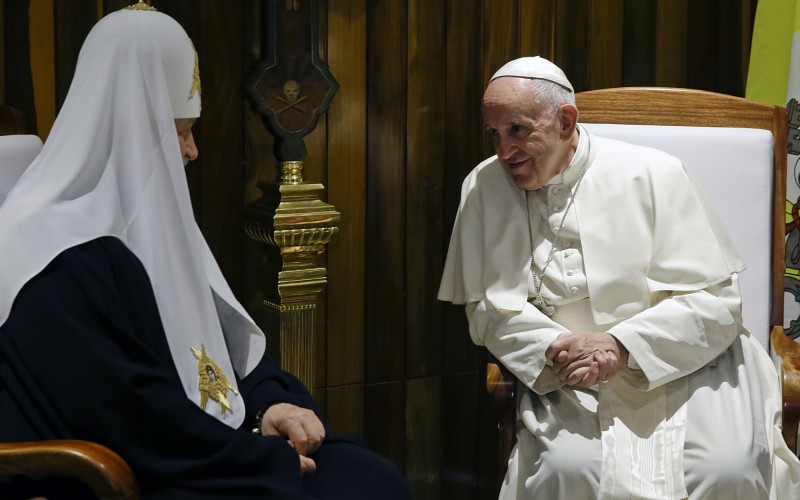 Among the top news stories today is the historic meeting between Pope Francis and Patriarch Kirill. It marks the first official meeting between the head of the Roman Catholic Church and a patriarch of the Russian Orthodox Church since the Great Schism almost one thousand years ago.

For those of you who were taught dates in history class, you may remember that the traditional year assigned to the schism between the East and the West is 1054. On July 16, 1054, Pope Leo IX’s legates, led by Cardinal Humbert, strode into the church of Hagia Sophia in Constantinople and laid a Bull of Excommunication against the Patriarch on the altar.

Others assign responsibility for the schism to the dispute over the Filioque (Latin for “and the son,” a phrase that Roman Catholics controversially added to the Nicene Creed) and to Pope Gregory VII’s issuance of the Dictatus Papae in 1075, which listed out the powers that belonged to the pope alone. Still others date the “real schism” to 1204, when the Crusaders sacked Constantinople.

But despite disagreements over the exact year of the schism (or whether it’s even possible to assign a year to it), most scholars and historians agree that it was preceded by centuries of mutual estrangement, in which Eastern and Western Christians simply grew apart. As Kallistos Ware writes in his classic The Orthodox Church:

“But the schism, as historians now generally recognize, is not really an event whose beginning can be exactly dated. It was something that came about gradually, as the result of a long and complicated process, starting well before the eleventh century and not completed until some time after… Long before there was an open and formal schism between east and west, the two sides had become strangers to one another; and in attempting to understand how and why the communion of Christendom was broken, we must start with this fact of increasing estrangement.”

The reasons for that estrangement are various. Constantine’s establishment of the Roman Empire’s new capitol in Constantinople, the fall of Rome, the barbarian invasions, and then the Franks’ establishment of a Holy Roman Empire in the West all contributed to the breakdown of unity between the east and the west.

But education, language, and culture also played a crucial role in the estrangement:

“In both east and west, people of learning still lived within the classical tradition which the Church had taken over and made its own; but as time went on they began to interpret this tradition in increasingly divergent ways. Matters were made more difficult by problems of language. The days when educated people were bilingual were over. By the year 450 there were very few in western Europe who could read Greek, and after 600, although Byzantium still called itself the Roman Empire, it was rare for a Byzantine to speak Latin, the language of the Romans. Photius, the greatest scholar in ninth-century Constantinople, could not read Latin; and in 864 a ‘Roman’ Emperor at Byzantium, Michael III, even called the language in which Virgil once wrote ‘a barbarian and Scythic tongue.’ If Greeks wished to read Latin works or vice versa, they could do so only in translation, and usually they did not trouble to do even that: Psellus, an eminent Greek savant of the eleventh century, had so sketchy a knowledge of Latin literature that he confused Caesar with Cicero. Because they no longer drew upon the same sources nor read the same books, Greek east and Latin west drifted more and more apart.”

In a time when Western education is becoming increasingly fragmented, and students less frequently read the same sources, I think a lesson to draw from the Orthodox-Catholic schism is this: when it comes to unity, education matters, language matters, and culture matters.