Academic Writing is Becoming a Caricature of Itself 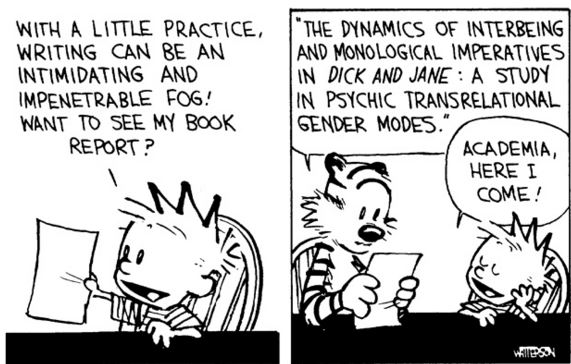 Much of modern postsecondary intellectual discourse emblematizes a regressive displacement of phraseology toward loquacious amalgamations intended to subvert intelligibility.

Which is academic-speak for “Most academic writing these days is crap.”

We’ve written on this subject before. In no other time in history have so many professors written so much that is unintelligible to the public, and even to most of their peers. As a critique of this trend, philosopher Denis Dutton’s used to hold a yearly “Bad Writing Contest,” in which he encouraged people to submit examples of unintelligible academic prose.

Well, if they still had the contest, I would have a potential candidate for the prize. It comes from an interview with Dr. Sidonie Smith—Professor of the Humanities at the University of Michigan—about her new book, Manifesto for the Humanities: Transforming Doctoral Education in Good Enough Times.

The following quote represents Smith’s answer to the question, “What is the ‘possibly posthuman humanities scholar’ and how does this idea relate to doctoral education?”

“Writing this book, I came to see the new scholar subject as a performative of passionate singularity, hybrid materiality and networked relationality. This is one sense in which the humanities scholar that is becoming is possibly posthuman, and a posthumanist scholar. The locus of thinking, for the prosthetically extendable scholar joined along the currents of networked relationality, is an ensemble affair. It involves the scholar, the device, the algorithm, the code. It involves the design architecture of platform and tool, the experiential architecture of networks, and the economy of energy.”

Ironically, the author’s book attempts to defend the continued relevance of the humanities in the modern university.