What Teddy Roosevelt Might Have Said About Those Starbucks Cups 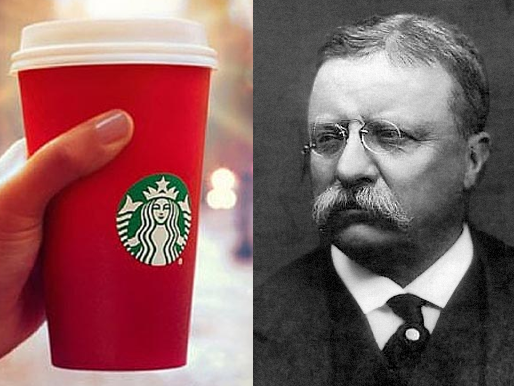 I’ve ignored most of the controversy over Starbucks dropping holiday-themed designs on its cups because, well, it’s stupid, and probably media-fabricated. It’s not that I don’t lament the decline of communally celebrated feasts; it’s just that I wasn’t really depending on a Seattle-based coffee company to revive the sanctity of Christmas… with cups decorated with snowflakes and reindeer (?!?).

Nevertheless, it struck me that there’s a parallel between outcries over Starbucks’ supposed “war on Christmas” and an incident during Teddy Roosevelt’s presidency over his desire to omit “In God We Trust” from new $10 and $20 coins.

Here’s what Roosevelt wrote in a 1907 letter to those who were protesting the omission:

“My own feeling in the matter is due to my very firm conviction that to put such a motto on coins, or to use it in any kindred manner, not only does no good, but does positive harm, and is in effect irreverence, which comes dangerously close to sacrilege. A beautiful and solemn sentence such as the one in question should be treated and uttered only with that find reverence which necessarily implies a certain exaltation of spirit.”

“Any use which tends to cheapen it, and, above all, any use which tends to secure its being treated in a spirit of levity, is from every standpoint profoundly to be regretted… [I]t seems to me eminently unwise to cheapen such a motto by use on coins, just as it would be to cheapen it by use on postage stamps or in advertisements. As regards its use on the coinage, we have actual experience by which to go. In all my life I have never heard any human being speak reverently of this motto on the coins or show any signs of its having appealed to any high emotion in him, but I have literally, hundreds of times, heard it used as an occasion of and incitement to the sneering ridicule which it is, above all things, undesirable that so beautiful and exalted a phrase should excite.”

In the first centuries of the Christian Church, there was a practice called the “Discipline of the Secret” (Disciplina Arcani) whereby Christians would avoid speaking of certain teachings in public lest they cheapen them. It seems the same spirit informed Teddy Roosevelt’s defense of omitting “In God We Trust” from the new coins, and it might also be worth considering for those who are up in arms about Starbucks’ red cups.

Mottos on coins have not succeeded in re-Christianizing America. Neither will a holiday-themed beverage container.