China Will Now Allow Couples to Have a Whopping Two Kids 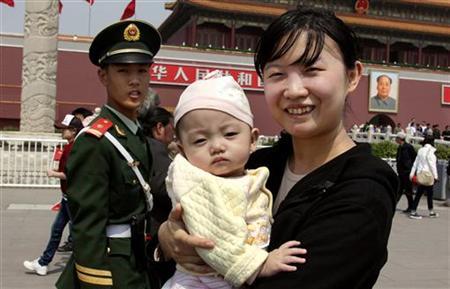 The all-beneficent People’s Republic of China is lifting its infamous one-child policy in favor of a two-child policy.

As you can guess, the reason is largely due to the aging population of China. The Washington Post reports:

“The nation’s fertility rate — 1.4 children per woman — is far below that of the United States and many other nations in the developed world, leading to a rapidly graying society and increasing demands on the state such as social programs and health care for the elderly.”

However, because the momentum of population growth and decline works like a snowball rolling down a hill, the policy switch won’t likely do much to slow down China’s coming demographic problems:

“Meanwhile, the number of people aged 60 and above will approach 400 million, or a quarter of the population, in the early 2030s, according to United Nations forecasts. The 60-plus population currently represents about a seventh of China’s people.

‘The reform will slightly slow down China’s ageing society but it won’t reverse it,’ said Peng Xizhe, a population professor at Fudan University.”

In addition, Peng adds, “The change won’t cause a baby wave, as the last policy change proved. Couples chose not to have second child because of economic pressure and insufficient social welfare.”

China’s one-child policy has been particularly controversial due to accounts of forced abortions, infanticides, and sterilizations. In most cases, however, the Chinese government collected fines from violators amounting to billions of dollars in revenue.

Given the graying populations of China and other countries around the world, people are increasingly questioning the narrative of overpopulation. But even if overpopulation is a reality, is a policy limiting how many children citizens have inherent unjust?