The Pope Francis Media Circus is a Two-Edged Sword 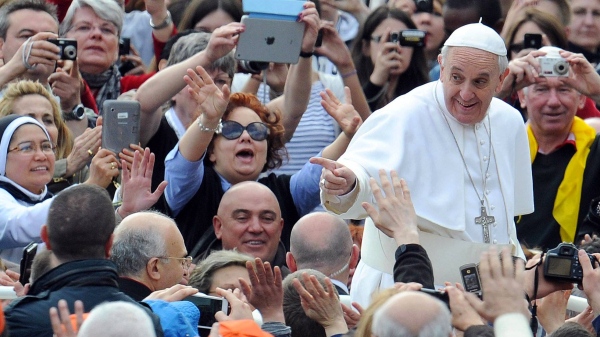 The excitement surrounding Pope Francis’ visit to America is the closest Catholics get to Beatlemania. Hundreds of thousands are hoping to catch a glimpse of the pope when he is in D.C., New York, and Philadelphia this week. My Facebook feed has seen more than one post from those with golden tickets to see the pope and the predictable “jealous” replies. Some are even saying that seeing the crowds has given them “chills.”

But for Christians in America, the frenzy surrounding the pope’s visit is a two-edged sword.

On the one hand, the attention Pope Francis receives is a consolation to many American Catholics. The faithful, church-going set often feels marginalized in the increasingly secularized culture of America. The recent SCOTUS decision on same-sex marriage has made them afraid that a ramped-up persecution will happen sooner rather than later. For Catholics of this ilk, the crowds and press coverage seemingly reaffirm their belief that Jesus Christ and the church will eventually conquer, that – as the Bible says – “the gates of hell shall not prevail against it.”

But it’s not just the hardcore Catholics who are eager about the Francis media coverage; many Catholics who have fallen away from the church are just as excited. They have applauded Francis’ seeming openness to updating the church’s approach to hot-button issues, and are refreshed by his passion for environmental and economic issues. For them, he is a sign of hope that the church will soon change its more traditional ways.

On the other hand, the media circus touches upon the very bone of contention many Christians, and some Catholics, have with the papacy. Efforts to reunite the world’s two billion Christians have concentrated on the papacy as the “church-dividing issue.” Among the criticisms leveled at the papacy: that too much attention has come to be focused on the pope and everything he says, that the church government headed by the pope has become too bureaucratic and centralized, that the borderline worship of the pope exhibited by many Catholics is misplaced and distracts from the essence of the faith.

Recent popes have been sympathetic to these concerns, and so has Pope Francis. He began his papacy with a call for “a conversion of the papacy” and denounced the “excessive centralization [that] complicates the Church’s life and her missionary outreach.”

But the media circus, the rock star treatment, the tweets…

In today’s interconnected media culture, one wonders: is the cult of personality surrounding the pope inevitable? Is it even possible for less attention to be focused on the papacy?