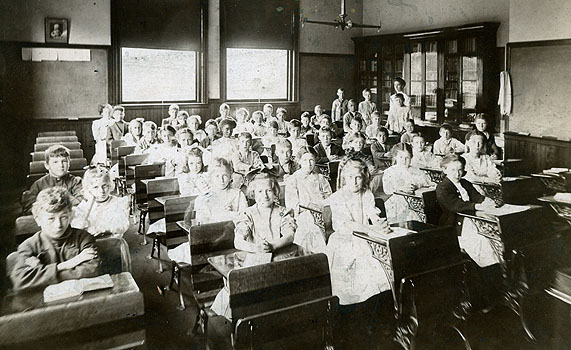 Many assume that America’s public education system developed organically in the aftermath of the Revolutionary War.

In truth, however, its origins lie in the Common School Movement led by Horace Mann in Massachusetts beginning in the 1830s. Drawing inspiration from Prussia and France, Mann envisioned and campaigned for a more uniform, centralized, and government-controlled education system than had previously existed in America.

Mann’s vision for American education eventually won out, but it was not without initial opposition. In 1840, a special legislative committee in Massachusetts had serious reservations about increasing government control over education. Interestingly, some of the reservations found in their final report—quoted below—are very similar to those you hear echoed in concerns about America’s education system today:

1) They worried about it destroying America’s republican principles:

“District schools, in a republican government, need no police regulations, no system of state censorship, no checks of moral, religious, or political conservatism, to preserve either the morals, the religion, or the politics of the state… Instead of consolidating the education interest of the Commonwealth in one grand central head, and that head the government, let us rather hold on to the good old principles of our ancestors, and diffuse and scatter this interest far and wide, divided and subdivided, not only into towns and districts but even into families and individuals. The moment this interest is surrendered to the government, and all responsibility is thrown upon civil power, farewell to the usefulness of common schools, the just pride, honor, and ornament of New England; farewell to religious liberty, for there would be but one church [the government]; farewell to political freedom, for nothing but the name of a republic would survive such a catastrophe.”

2) They worried about it being used as a tool for increasing the government’s power:

“After all that has been said about the French and Prussian systems, they appear to your Committee to be much more admirable, as a means of political influence, and of strengthening the hands of the government, than as a mere means for the diffusion of knowledge. For the latter purpose, the system of public Common Schools, under the control of persons most interested in their flourishing condition, who pay taxes to support them, appears to your Committee much superior. The establishment of the Board of Education seems to be the commencement of a system of centralization and of monopoly of power in a few hands, contrary, in every respect, to the true spirit of our democratical institutions; and which, unless speedily checked, may lead to unlooked-for and dangerous results.”

3) They worried about it being used for the purposes of propaganda and reducing parents’ influence over their children:

“Your Committee has already stated, that the French and Prussian system of public schools appears to have been devised, more for the purpose of modifying the sentiments and opinions of the rising generation, according to a certain government standard, than as a mere means of diffusing elementary knowledge. Undoubtedly, Common Schools may be used as a potent means of engrafting into the minds of children, political, religious, and moral opinions;—but, in a country like this, where such diversity of sentiments exists, especially upon theological subjects, and where morality is considered a part of religion and is, to some extent, modified by sectarian views, the difficulty and danger of attempting to introduce these subjects into our schools, according to one fixed and settled plan, to be devised by a central Board, must be obvious. The right to mould the political, moral, and religious opinions of his children is a right exclusively and jealously reserved by our laws to every parent; and for the government to attempt, directly or indirectly, as to these matters, to stand in the parent’s place, is an undertaking of very questionable policy. Such an attempt cannot fail to excite a feeling of jealousy, with respect to our public schools, the results of which could not but be disastrous.”

Source: Charles Glenn, The Myth of the Common School