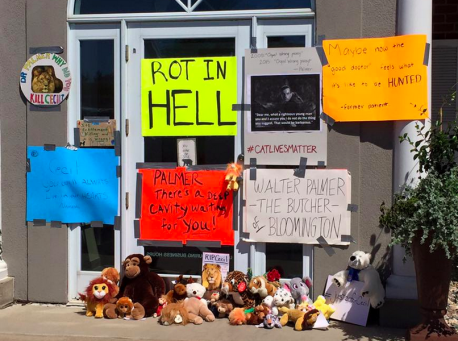 Many people are confused why more vitriol is being directed toward Walter Palmer, the killer of Cecil the Lion, than toward Planned Parenthood after another undercover video of their actions was released. Many assume it is because the mainstream media is actively colluding with Planned Parenthood, or is suppressing news about the video because they are dogmatically pro-choice.

In this post, I don’t wish to tell you which news story you should be most angry about. I simply wish to point out that there may be a deeper reason why Walter Palmer is now public enemy no. 1.

The thought of Stanford literary critic Rene Girard may help us shed some light on this phenomenon—specifically, his theory of the “scapegoat.”

Here is the entry on the theory from the Internet Encyclopedia of Philosophy:

In Girard’s psychology, internal mediation and metaphysical desire eventually lead to rivalry and violence. Imitation eventually erases the differences among human beings, and inasmuch as people become similar to each other, they desire the same things, which leads to rivalries and a Hobbesian war of all against all. These rivalries soon bear the potential to threaten the very existence of communities. Thus, Girard asks: how is it possible for communities to overcome their internal strife?

Whereas the philosophers of the 18th century would have agreed that communal violence comes to an end due to a social contract, Girard believes that, paradoxically, the problem of violence is frequently solved with a lesser dose of violence. When mimetic rivalries accumulate, tensions grow ever greater. But, that tension eventually reaches a paroxysm. When violence is at the point of threatening the existence of the community, very frequently a bizarre psychosocial mechanism arises: communal violence is all of the sudden projected upon a single individual. Thus, people that were formerly struggling, now unite efforts against someone chosen as a scapegoat. Former enemies now become friends, as they communally participate in the execution of violence against a specified enemy.

Girard calls this process ‘scapegoating’, an allusion to the ancient religious ritual where communal sins were metaphorically imposed upon a he-goat, and this beast was eventually abandoned in the desert, or sacrificed to the gods (in the Hebrew Bible, this is especially prescribed in Leviticus16).The person that receives the communal violence is a ‘scapegoat’ in this sense: her death or expulsion is useful as a regeneration of communal peace and restoration of relationships.

However, Girard considers it crucial that this process be unconscious in order to work. The victim must never be recognized as an innocent scapegoat (indeed, Girard considers that, prior to the rise of Christianity, ‘innocent scapegoat’ was virtually an oxymoron; see section 4.b below); rather, the victim must be thought of as a monstrous creature that transgressed some prohibition and deserved to be punished. In such a manner, the community deceives itself into believing that the victim is the culprit of the communal crisis, and that the elimination of the victim will eventually restore peace.

America is currently polarized, caught up with “internal strife.” But abortion is a polarizing issue, and thus, Planned Parenthood will probably not serve as an effective victim against which disparate parties can unite and temporarily “restore peace.”

The death of a celebrity animal, however, is a perfect circumstance to temporarily unite Americans via media coverage. Whether you’re on the political right or left, chances are you’ve grown up around domesticated, anthropomorphized animals, and chances are you still view animals as symbolizing innocence.

And if Girard’s theory is correct, Walter Palmer is the perfect scapegoat—a rich, white man who killed a quasi-celebrity lion for sport. That’s someone a large portion of people on both the right and the left can feel comfortable punishing.