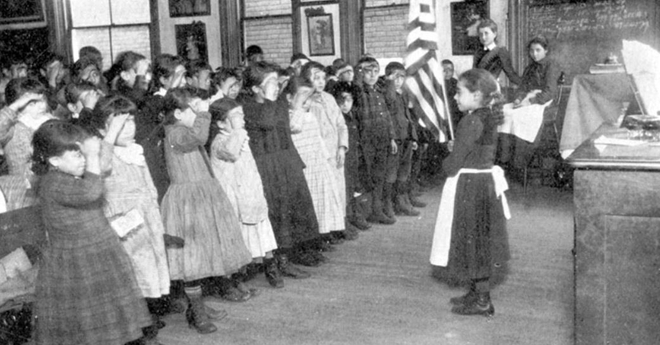 If you want to gauge the future of the American education system, you have to understand its beginnings.

When it comes to education, Americans are all Massachusettsans at heart. In the 1830s, the state of Massachusetts led the charge for the Common School Movement that was to sweep across America. Borrowing from recently created systems in some European countries, the new schools developed by Horace Mann and his adherents became the pattern for the institution we now know as the American education system. It was more centralized, more government-controlled, and more compulsory than education had been in the past.

As Charles Glenn shows in The Myth of the Common School, the newly created American education system was very much a product of its time. The ideological roots of this new system – the Enlightenment, rationalism, and nationalism – had been percolating for decades before. But it took particular social challenges happening in Massachusetts in the first half of the 19th century to catalyze popular support for it.

Among these social challenges, three in particular were foremost:

The creation of the American education system coincided with the Industrial Revolution. During this time, people in Massachusetts were increasingly abandoning their farms for the cities where they found work in the manufacturing industry. Urban life and work has always brought parenting challenges, and there was a growing feeling among people of that time that parents in the cities were abandoning their responsibility to properly raise their children.

With increased urbanization came increased poverty. People in the manufacturing cities of Massachusetts competed for a limited number of jobs with a growing immigrant population, and many lived in squalid conditions. As Aristotle said, “Poverty is the parent of revolution and crime.” There was a real worry that poverty would lead to disorder and depravity, and threaten the fragile unity that then held Massachusetts together.

Massive immigration really tipped the scales of public opinion in favor of a more centralized public education system. Particularly distressing to the people of Massachusetts was the Roman Catholicism of its Irish immigrants. There were many fears that the young and still-tenuous national identity of America would be overtaken by “popery,” the “debasing and corrupting influences of the Roman Catholic religion,” and allegiances to foreign (Catholic) sovereigns. Massachusetts wanted these immigrants to be quickly and effectively assimilated to the new country’s way of life.

At the time, Horace Mann appeared to have the answer to all of these social challenges: education. In response to urban parenting challenges, Mann advocated the idea that schools and teachers could increasingly act in loco parentis – “in the place of the parent.” In response to the challenge of poverty, Horace Mann wrote, “Education…beyond all other devices of human origin, is a great equalizer of conditions of men – the balance wheel of the social machinery…It does better than to disarm the poor of their hostility toward the rich; it prevents being poor.” And in response to the challenges to national identity posed by immigration, Mann recommended an education rooted in “judicious religious instruction” and Protestant morality.

Almost 200 years later, though some of the particulars have changed (most notably, the extreme fear of Catholics), these same basic challenges remain. We still deal with crowded cities, poverty, and how to adequately welcome and receive immigrants into American life. What is more, many urban districts are failing to educate the poor and immigrant populations that the American education system was instituted to address.

Some Americans have interpreted this fact as a failure of Mann’s system, and a call to update the system to adequately address the problems of our 21st century. Others, on the other hand, are finally waking up to what Mann and his followers never realized, namely, that education is not and will never be a panacea for all of society’s ills and challenges.