Quality Education is Not Rocket Science 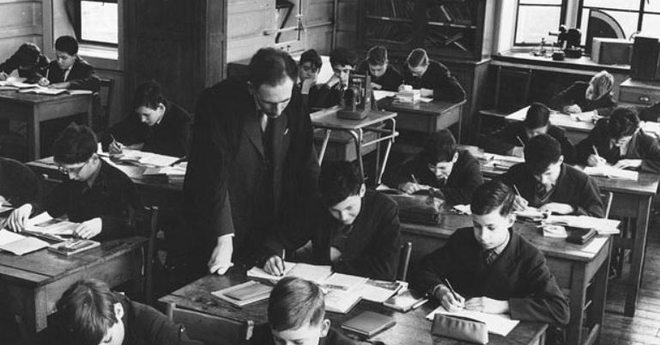 Every week it seems I receive three or four letters from people who are establishing new schools or reforming old ones. These letters are most encouraging, and all of the writers, without exception, are dedicated to restoring what is called a “classical” education. Sometimes that implies the study of the true classics, the literature of ancient Greece and Rome. More often it simply means a return to sanity, both as to what the children are to read and learn, and as to how they are to learn it.

For example, since young children can commit things to memory as readily as a sponge soaks up water, the restorers are quite cheerful in their championing of that underused faculty. They know that a child can learn the basic single-digit operations of arithmetic—the addition and multiplication tables—without a lot of fuss, and to learn them cold, acquiring mastery and making themselves ready for more complicated problems, including those they might solve in their minds.

In the movie Sounder, an African-American boy living in the rural south goes on a search for his father, who has been sentenced to a year of hard labor in a tucked-away prison camp. He finds himself in a schoolhouse, with about thirty black children and a young black schoolmistress. The children are answering arithmetic problems called out by the teacher.

“Three sixes are!” she cries.

“Eighteen!” the children reply as one.

A moment of hesitation. Then a few voices, “Forty eight!”

More hesitation.  Then the voices chime in, here and there. “Ninety—ninety six!”

One of my favorite professors in graduate school grew up on his grandfather’s farm in Saskatchewan, back in the days when a wheat farmer would spend long hours behind the plow. He told us that his grandfather’s neighbor spent those hazy hours sometimes reciting Milton’s Paradise Lost.  He had gotten it by heart. Notice what great difference there is between the phrases “learning by rote” and “getting something by heart”? You cannot do such a thing without considerable intelligence and love.

One summer, then, I determined I’d do the same, and got into the middle of Book Five, when September came around and school started, and I set the cherished task aside. But it is still a wonderful thing to have so much of that splendid work in my mind, hearing its music, ready to assume form and tone and dramatic import as I cock my head, narrow my eyes, and say,

Here at least
We shall be free; the almighty hath not built
Here for his envy, shall not drive us hence;
Here we shall reign supreme, and to my choice
To reign is worth ambition, though in Hell:
Better to reign in Hell, than serve in Heaven.

Ah, that is but one thing, the care and strengthening of the memory, that we all know is good and a worthy object for school, though for fifty years we have been cowed by the educational “experts” into believing that it is contemptible, simplistic, backward, and ineffectual. So we end up with sixth graders who are supposed to solve simultaneous linear equations, but who do not instantly see that 54 divided by 6 is 9, or that 12 percent of 94 is going to be a little less than 12.

What I’m trying to say here is simple enough. My advice to all of you who are building anew: Do not be played for chumps! This is not quantum physics. Children learn naturally, and if they are treated well, they will learn most things with ease. What requires practice, requires practice, and though that is difficult in one sense—you have to do the math, you have to diagram the sentences, you have to commit the declensions to memory—it is perfectly straightforward. You know how to do it, and you know when you’ve done it.

I have similar advice for reading. “What books shall we assign?” My answer is simple. You don’t have to develop some grand all-considering plan for producing scholars of Dostoyevsky. Read good books to the children, have them read them also to you, and have them read them on their own.

What’s a good book? John Senior came up with a fine list of the Thousand Good Books, and you could simply go to that list and pick your way about in it, like a kid exploring in the woods. Good books are sometimes Great Books, and sometimes not. Some Great Books aren’t for children or even adolescents. Would you show a group of teenagers the admittedly fine but disturbing and sometimes obscene movie Midnight Cowboy? No, you wouldn’t; so why are they reading the sometimes obscene and nearly nihilistic Slaughterhouse-Five?

The Good Books are food for a wholesome imagination. They are well-written. They introduce young people to characters they will never forget. They soar beyond easy cynicism or nihilism. They soar beyond the sweaty halls of politics. They may well have villains in them, there may be warfare, but there will not be the creepy relish for bloodshed—no itch for the base, the sick, the bizarre, the filthy, the evil. No girly vampires.

We know where to find these Good Books. They are everywhere, or they used to be. It almost does not matter in what order the children read them, and many of them can be read again and again, and are as satisfying for grownups as they are for the wide-eyed little ones: Heidi, Treasure Island, The Wind in the Willows, The Jungle Book, The Secret Garden, The Yearling, David Copperfield, Silas Marner, Black Beauty, Kim, The Adventures of Robin Hood, Little Women, Oliver Twist, Tom Sawyer, Hans Brinker, the fairy tales of the Brothers Grimm, and of Hans Christian Andersen.

What about when the children are older? There’s no lack of things to read. We have all of the poetry of our British and American heritage: Chaucer, Spenser, Shakespeare, Milton, Keats, Tennyson, Browning, Whittier, Dickinson, Frost, and many more. We have all of the wonderful novels of Jane Austen and Dickens and Eliot and Mark Twain and Walter Scott. There’s the great literature of the western world—Virgil and Dante and Cervantes and Tolstoy.

You cannot go wrong. Find textbooks written before 1950—grammar, history, even geography. Then surround young people with beauty and goodness. It is not like going to the moon. It is like looking up at the stars.

But will your students be ambushed by the detestable standardized tests? Do not fear. Do not let the confidence men and elixir salesmen fool you. Homeschoolers regularly take those tests apart, and they do not spend a year preparing for them, nor do they use textbooks whose politically “progressive” content the tests reflect and reward. If they can do it, so can your students.

Think: your students will know English grammar, as a coherent and fascinating whole. The others won’t. Your students will have a quick sense of number. The others won’t. Your students will have in their ears, their hearts, and their minds, and thus at their fingertips as they put pen to paper, the noble rhythms of great and good English writers, and none of the sublingual grunts of contemporary dabblers in the twisted and weird. The only rotten English they’ll have read will be what they find in newspapers and on the internet; but you can do your best to make them aware of how bad that is.

Be bold, be bold! Remember Hans Christian Andersen! The superintendent has no clothes. The commissars of the Common Core have no clothes. The developers of curricula have no clothes. They are all a great big herd of balding and belly-sagging naked people, swaggering and blustering and ordering everybody around. Let some little boy cry out to any one of them, “Hey mister, diagram this sentence!” Go for it, and let the devil take the hindmost!