When he speaks of his son, you can hear the pride and the love in Ernest Ramirez’s voice.

“When Junior was seven, I bought a couple of baseball gloves,” he tells me over the phone. “We played lots of catch, and he picked up the game right away. At first, if I threw the ball hard, he was afraid, but I told him ‘As long as you got your glove up, you’re going to be okay.’”

Later Ernesto, known as Junior to many of his friends and sometimes described as “my baby boy” by his dad, became a well-known ball player in his hometown of Edinburg, TX. His dad coached him and his Little League team—“they were all my boys,” he says, “we were like a family.” Junior also joined his high school team, where he pitched and played first base. 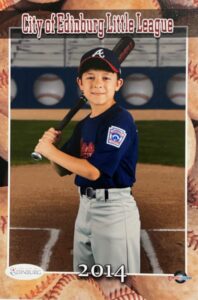 The elder Ramirez loves vehicles of all kinds and owns three motorcycles. From an early age, his son inherited this fascination with motors and speed. Given an electric four-wheeler at age four, he was soon asking for lights on his tiny car like his dad had on his motorcycle. At one point, Ramirez says with a chuckle, he even asked if Dad couldn’t replace the engine of the four-wheeler with one from a motorcycle.

“Junior liked figuring things out for himself, too,” Ramirez says. “Like cooking. He taught himself to make several dishes. He began with macaroni and cheese, which he loved—I still have boxes of it here—but here’s what’s funny. He couldn’t stand cheese on a burger or sandwich. Said it just didn’t taste the same.”

When Junior was 10, Ramirez bought him his first rifle, a .22, and later replaced that with an AR-22. He frequently took his son to the local range, where he taught him gun safety as well as marksmanship. “He was a good shot,” Ramirez tells me.

“He had a heart of gold. Everybody who knew him loved him because he was so respectful,” Ramirez says. “I always took him to church, taught him to love God and country, and to stand up for people. I told him to study hard and get good grades in school. I’d wake him in the morning, and he’d always come out when I got home from work and give me a hug and a kiss.” 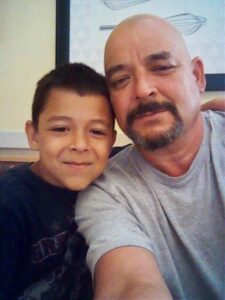 Young Ernesto Ramirez had dreams of playing big league ball. Barring that possibility, he wanted to enlist in the Air Force and learn a trade.

Those dreams ended on April 24, 2021. While playing basketball at a park with his best friend—the two boys had been pals since age two—Ernesto collapsed. Away from home at the time, Ernest Ramirez chased the ambulance carrying his son to the hospital, where he learned that his beloved baby boy was dead at age 16.

The official cause of death was listed as myocarditis, meaning inflammation of the heart.

Ramirez believes otherwise. Five days before he died, Junior had received the COVID-19 vaccine. Believing that the vaccine was safe and effective, Ramirez had arranged for his son to receive his inoculation at a local hospital.

Since that nightmare of a day, Ernest Ramirez has spoken loudly and vociferously about the dangers of the vaccine, particularly when administered to the young. He has met with doctors investigating the deaths and impairments caused by the vaccine. He has taken his case to the Texas legislature and to certain officials in Washington, D.C. He’s set up a website honoring his son and other victims of the vaccine while summoning others to step forward and help expose the dark side of our government and the pharmaceutical companies involved.

His battle for truth has not gone completely unheard in the media. Jon Miltimore examines this case in his article on vaccine effectiveness. Justus Hope, MD, interviewed Ramirez and explores other possible reasons for dangerous side effects of this medicine. Tim Jackson of Lifesite News has also written of Ramirez and his “baby boy.”

Down, down, down into the darkness of the grave

Gently they go, the beautiful, the tender, the kind;

Quietly they go, the intelligent, the witty, the brave.

I know.  But I do not approve. And I am not resigned.

Ernest Ramirez does not approve, and he is not resigned. He figures the fight for truth pays homage to his son. “What am I supposed to do?” he asks. “Bow down and keep quiet?”

A final note: In the Ramirez driveway sits a well-preserved 1955 Ford truck, a gift from an elderly uncle intended for Ernesto once he had earned his driver’s license. Mr. Ramirez sometimes drives the truck when he goes to visit the grave of his son. This antique is worth quite a bit of money, but it’s not for sale.

You see, when Ernest Ramirez takes that ’55 Ford out on the road, he isn’t riding alone. 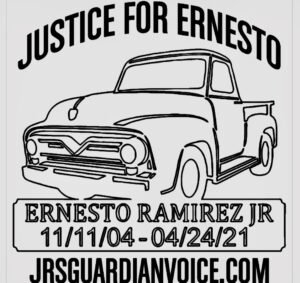