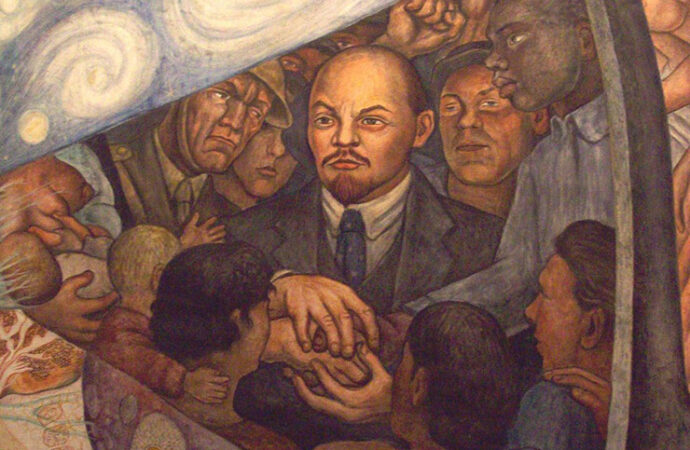 An interesting sidelight on our current ruling regime is its changed attitude toward Russia. From the time of the Russian Communist takeover until quite recently, American leftist “intellectuals” sympathized with the Russian regime and gave it every benefit of the doubt. During the Cold War leftists pushed for unilateral Western disarmament, beating down those who exposed the Communist infiltration of the U.S. government, supporting the enemy during the Vietnam War—as clearly treason as anything can be. They even praised the great Soviet experiment and its jolly democratic leader “Uncle Joe” Stalin.

Now the present American regime is following the playbook left behind by Stalin’s predecessor, Communist revolutionary Vladimir Lenin, by destroying a society and substituting an ideological dictatorship.

Lenin knew exactly what he was doing and how to go about establishing and maintaining his Communist regime. He faced a corrupt and incompetent government much like that of the U.S. today, but he had several advantages our American revolutionaries don’t have, namely, acting during a bloody World War and in a country that, unlike the U.S., already had a long authoritarian tradition. Here are a few ways in which the U.S. is following the Leninist Protocol:

The current party line dominates all communication as the only truth, even when, as in 1984 the “truth” needs to be changed. This has already happened in the U.S., and the punishment and canceling of dissident news is ongoing and approaching completion by the oligarchic controllers of the mass media. The few opposing websites reaching a small public can be likened to Russian samizdat.

Lenin was adamant that no discussion, a remnant of decrepit bourgeois democracy, be allowed. Opponents were never to be heard; they were to be demonized and shouted down relentlessly, outed by neighbors and relatives. The Reds had a large vocabulary of derogatory terms to silence “class enemies,” a purpose for which the label “racist” serves the aspiring U.S. revolutionary regime perfectly. If dissidents refuse to be silenced, execution and the gulag await them.

Lenin emptied the prisons to have a criminal force to control ordinary people. This has already happened in the U.S. as Antifa and Black Lives Matter control cities. People whose only crime is defending themselves are prosecuted beyond the full extent of the law, while violent offenders go free and are celebrated, becoming a handy mob for government enforcers.

Furthermore, courts no longer appear to consider truth or falsehood but make political decisions as in any dictatorship. During the establishment of the Soviet regime, many privileged officeholders supported the new regime to hold their places, as it seems the court system does, especially in its recent refusal to consider disputes between states over the late election.

Stalin purged the Russian military so thoroughly that he was at a disadvantage when his friend Hitler turned on him and invaded.

Today’s American armed forces are a reservoir of non- and antirevolutionary sentiment and power. Yet indicators of purge-like actions were present during the troop surge in Washington D.C. for the inauguration, while the military has been intent on promoting diversity and inclusion among its ranks. How sad that the men of Guadalcanal and Normandy did not have diversity training and feminist lessons so they could know what they were dying for.

Hatred of the Working Class

The Soviet system claimed to be liberating the proletariat, the oppressed, non-propertied classes. That did not keep them from starving several million kulak “deplorables” to death for the material benefit and ideological satisfaction of the Communist elite. In fact, Communists do not now and never have cared about the workers and have very seldom come from those proletariat ranks. They hate and fear the “deplorables” who are entirely alien to them. Industrial unrest was just a way of subverting Western civilization, which they have always hated. Today’s nonwhite, minority classes now serve their purposes of subversion just as well.

Communism regards the past as entirely evil and counterrevolutionary. It must be abolished and forgotten so that people will focus on the future Communist utopia, especially since the actual present Communist utopia has never been very nice to look at.

The same is true in present-day America where symbols of the Confederacy, a noble and much-loved part of our nation’s Southern heritage, are being actively destroyed. Unfortunately, other respected reminders of an earlier time are also on the Leninist agenda.

During the 2008 election, Barack Obama scornfully dismissed small town, middle American voters as those who “cling to guns or religion.” His comment demonstrates that rooting out Christianity or making it a tame servant of the regime is on the agenda. We have not had a lot of church destruction so far, but it can’t be long before cathedrals are trashed and turned into Walmarts or diversity palaces. The China flu plandemic lockdown badly disrupted Christian worship, and clergy are still being jailed for trying to hold services in some areas.

Widespread ownership of land and small businesses is a problem for those who control a centralized economy. The lockdown went a considerable way toward undermining private property and livelihoods. There is not the least doubt that the U.S. government is owned lock, stock, and barrel by a tiny minority of big capitalists.

Of course, the Leninist program for America is not yet complete, but the end of American freedom and prosperity is well advanced.

Worst of all is the damage our present ruling elite is inflicting on the soul of Western civilization. The highest goal of that civilization was Truth and Beauty, which the poets tell us are really one thing, a goal never fully reachable but always inspirational. Instead, our culture seems set on repudiation of that goal entirely.