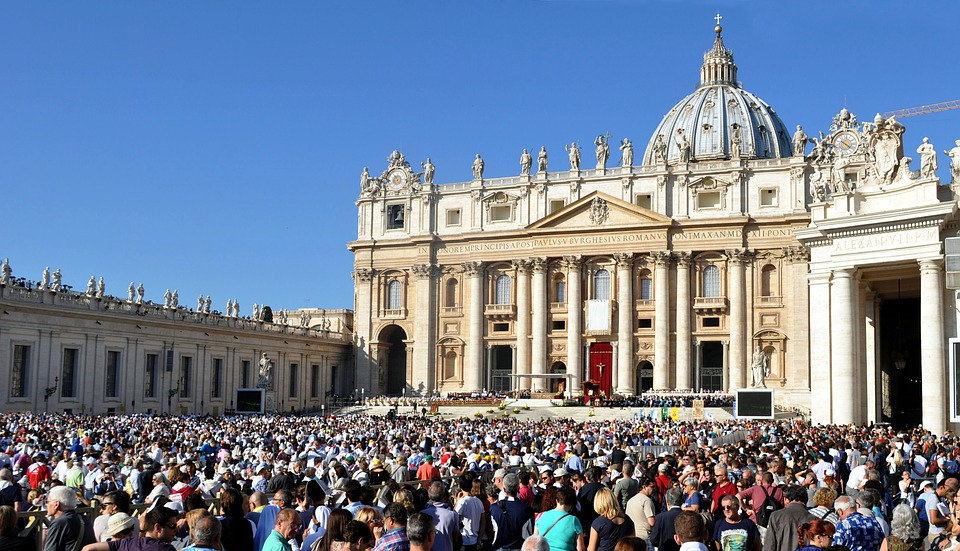 Ross Douthat has penned a lengthy piece in The New York Times about the now-infamous attack on Catholic/Evangelical alliance in the US. You know, the unhinged piece written by Jesuit Antonio Spadaro and Rev. Figueroa? In his critique, Douthat also calmly surveys the growing ideological discontent among Catholics to modern (meaning, in this case, false) “liberalism.”

But some of that discontent is truly frightening stuff. Scratch below the surface and you find ideas like: “Hey, why don’t we socialize private property, eliminate the investor class, open all the borders, give everyone a lifetime guaranteed income without working, suppress ‘homophobia,’ establish a world government and outlaw Protestantism?” No, I’m not making that up. Nor exaggerating for effect. That is the program proposed by the Tradinista collective, a defunct group of anonymous bloggers.

In his current piece, Douthat addresses the Vatican’s attitude toward Anglo-American freedom — the vision of man as endowed with dignity and inborn rights. Heirs of what Daniel Hannan calls the Anglosphere draw very clear conclusions from that vision. We claim as our birthright specific liberties, including the rights to life, liberty, and the pursuit of happiness. We also affirm protection of property rights and our freedom to work as we choose — within due limits that protect the rights of others. Read The Stream’s 10 Principles for an eloquent explanation and defense.

This political program used to be called “liberalism,” before that word was tainted. Douthat uses liberalism in that sense, which is, sadly, confusing. Much better to say “classical liberalism” or “Anglo-Americanism.” I’ll use the latter here, because it highlights the origin of this distinctive and noble tradition. (Jeffrey Tucker has written at FEE in the past on Pope Francis’ apparent rejection of many tenets of the Anglo-American, liberal tradition.)

Douthat doesn’t examine whether this tradition is true or not. That would seem to me the critical question. Instead, he squints at “liberalism” through the lens of Vatican Realpolitik. The Church, he said, began to flirt with Anglo-Americanism in the 19thcentury. At Vatican II, the Council Fathers endorsed it. Now, Douthat suggests, that tradition may passing away, and the Church might adopt something else. You know, the way we changed the rules about nun’s habits.

Let’s leave aside economic and political freedom for now. They’re crucial, of course, but they play a distant second to the critical moral question, religious liberty. It’s the only major issue on which Vatican II made any real developments to what the Catholic Church says about the world.

Before Vatican II, multiple popes and councils allowed for governments to persecute “heretical” Christians. That is to say, every baptized person who’s not an orthodox Roman Catholic. In fact, Catholic kings used to promise to do just that as part of their coronation oaths. At Vatican II, the Church denounced this policy, and said that it violates natural law.

A certain set of Catholics since Vatican II has rejected this embrace of religious freedom. Some do because they think that a change on this issue undermines Church authority. It certainly narrows and focuses the scope of that authority. As I explained in an article provocatively titled “The Myth of Catholic Social Teaching,” the changes in papal statements on these and other issues show us one thing clearly. The Vatican is not an oracleon details of economics or politics. The Church’s ordinary teaching authority on those areas of life does not extend to policy specifics. If it did, Church statements on economics and politics would be consistent, just as they are on dogma.

But they aren’t. The old allowances made for slavery and torture weren’t infallible dogma. Neither are the new condemnations. We’ll just have to use core principles of natural law to figure those questions out, using reason and not arguments from authority. That’s the task of laymen, anyway.

However, some Catholics seem desperate to prove that old Vatican statements affirming that it is good to persecute “heretics” still are binding. That Vatican II did not in fact forbid Catholics from using violence against non-Catholic Christians.

Scholar Thomas Pink argued in First Things that the Church’s declaration at Vatican II only said that the state must not use force against Protestants, Orthodox Christians, and others. But the Church may coerce them, using not just spiritual but temporal weapons. That presumably means police and prisons. Run by the Church, with every person baptized as a Christian (even as an infant) subject to its authority. (Pink doesn’t address whether the church may take up the old state practice of actually executing heretics.) You might have thought using force to punish wrongdoers was reserved to the state. But Pink argues that this is a modern, secularist error.

No, I’m not making this up. Here it is in Pink’s own words, published in Father Neuhaus’s old magazine:

Could this possibly be the real (esoteric) meaning behind the plain words of the Council? Read them below:

This Vatican Council declares that the human person has a right to religious freedom. This freedom means that all men are to be immune from coercion on the part of individuals or of social groups and of any human power, in such wise that no one is to be forced to act in a manner contrary to his own beliefs, whether privately or publicly, whether alone or in association with others, within due limits.

The council further declares that the right to religious freedom has its foundation in the very dignity of the human person as this dignity is known through the revealed word of God and by reason itself. This right of the human person to religious freedom is to be recognized in the constitutional law whereby society is governed and thus it is to become a civil right.

How respectful is it of the church to suggest that it would issue such a sweeping declaration of fundamental human rights, but leave in the text a loophole the size of Red China reserving for itself the privilege to violate what it calls a “human” and “civil” right?

Douthat suggests that the future of Catholic political thinking might lie in this direction. If it does, God help us all.

This article was republished with permission from FEE.org. Read the original article here.