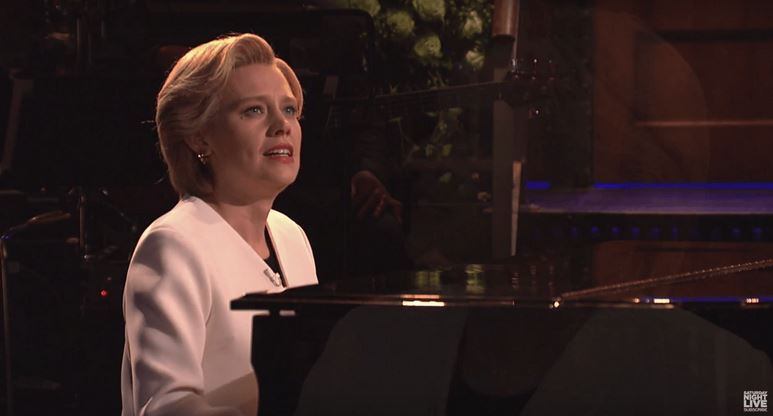 Take a deep breath, celebrities. When oxygen returns to your brains, you’ll realize a few things. You want to sell tickets to the 52 percent of Americans who didn’t vote for Hillary Clinton. You want your shows to be watched by people who live between the coasts. Maybe (and this is going out on a limb) you even want to understand the citizens of the country you live in.

So for your own sake, shut up and take a few weeks off. We won’t miss you.

In the week since the election, leading entertainment figures have rushed to make fools of themselves, allowing their opposition to Donald Trump to slip into characterizing his supporters as racists, fools, demons and troglodytes and essentially raising a middle finger to 60 million Americans while shouting “F— you” (as John Oliver more or less did when he ended his post-election episode of Last Week Tonight with a montage of citizens and celebrities cursing 2016, mainly because of Trump’s victory).

Saturday Night Live delivered a cringe-inducing, awful salute to Hillary Clinton last weekend during its opening segment when, for perhaps the first time in its 40-year history, it devoted an entire “cold open” to tear-jerking. (Even after 9/11 and the murders of thousands of people less than five miles from where the show is taped, SNL found a way to be humorous rather than despairing).

Turning to Saturday Night Live for its sense of the tragic is like going to an Amish prayer meeting house for an exotic dance routine, but SNL still made the utterly bizarre choice to open its first post-election show with Kate McKinnon playing Hillary Clinton playing Leonard Cohen playing “Hallelujah” on the piano. McKinnon, an avowed Hillary Clinton fan who nonetheless occasionally was spot-on in her portrayal of the failed ex-politician as maniacally obsessed with attaining the presidency, aimed the segment solely at whatever portion of the American public is shedding tears for Mrs. Clinton’s spectacularly inept presidential run. In other words, SNL was simply writing off the majority of Americans who dislike Clinton and assuming that its audience was more or less composed exclusively of “I’m With Her” types.

Apparently the writers of the show found a confluence between Cohen’s lyrics and Clinton’s self-immolation:

I did my best, it wasn’t much

I couldn’t feel, so I tried to touch

I’ve told the truth, I didn’t come to fool you

Because of course Hillary Clinton was just so honest; that was her big problem. She didn’t come to fool us, not at all. (Her and Richard Nixon). “I’m not giving up and neither should you,” McKinnon said, a remark indistinguishable from Hillary Clinton campaign propaganda. Even more bizarrely, Alec Baldwin implied that SNL, whose entire season so far has amounted to an in-kind contribution to the Democratic National Committee, was holding back because its corporate masters wouldn’t let them endorse Clinton.

Scarcely able to contain himself, HBO star Oliver predictably spent his entire show denouncing Trump, informing the media that its blitzkrieg of anti-Trump stories was far too fair to the now president-elect, adding that Trump proposals such as enforcing immigration law and repealing the Obamacare legislation that was passed against the wishes of the American people amount to “the to-do list on Satan’s refrigerator” and tagging Trump supporters as racists. Trump, Oliver claimed, is “Klan-backed,” pointing out that the obscure failed politician David Duke, a former Grand Wizard, supported Trump. In the logic of liberals, if any horrible person supports you, even someone whom you’ve never met and whose support you disavow, you’re forever tied to that individual.

Trump had no ties to David Duke and repudiated him when asked. By contrast, Hillary Clinton eulogized ex-Klan officer Robert Byrd, calling him “My friend and mentor.” Unlike Duke, Byrd was not obscure or unimportant, having worked closely with both Clinton and Obama as chairman of the Senate Appropriations Committee. And remember when it was guilt by association, if not actually racist, to even mention President Obama’s long, extensive, friendly association with the overtly and loudly racist Rev. Jeremiah Wright—whose words Obama borrowed for the title of one of his books, and at whose church Obama was baptized?

Other celebrities went bonkers as well. Katy Perry Tweeted, “RISE UP,” “THE REVOLUTION IS COMING” and similar anti-democratic nonsense after Clinton lost. Jennifer Lawrence, seemingly echoing the call for violence, wrote, “Do not let this defeat you—let this enrage you! Let it motivate you! Let this be the fire you didn’t have before.” Taxi Driver writer Paul Schrader said Trump’s election was “a call to violence” and asked supporters to “finance those who support violent resistance.”

“What the f— happened?” was John Oliver’s big question this week. Maybe Oliver could find an answer if he emerged from his Manhattan bubble, crossed the Hudson River and went out to meet some of Donald Trump’s 60 million supporters.

Instead, Oliver suggested he would continue to do the lazy thing—lob wisecracks at a country he plainly does not understand. He got some of the biggest cheers from his audience when he suggested his viewers donate to leftist causes in the names of their Trump-loving older relatives, then present receipts of the donations to those Trump fans as Christmas presents. In other words, Hillary Clinton supporters should, instead of winning over their neighbors by making superior political arguments, turn their energies to belittling Trump supporters and being annoying. News flash, John: They’ve already tried that. It didn’t work.