Yes, Blacks can be Racist 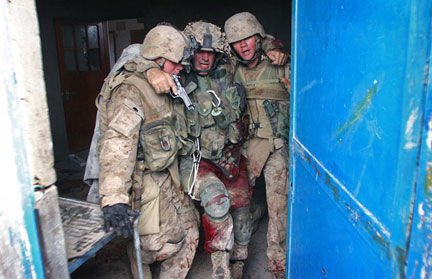 The issue of racism in America may have taken an interesting turn this week with the alleged assault of a white, Hispanic Marine by a group of black teens and adults in Washington, D.C.

Before jumping into the story, let us back up for a moment and ask ourselves first, “What is racism?” There is, of course, the standard Oxford definition:

“The belief that all members of each race possess characteristics or abilities specific to that race, especially so as to distinguish it as inferior or superior to another race or races.”

But that is increasingly not the definition used by some of our cultural leaders. The Oxford definition is very much rooted in judging individual behavior. Are you prejudging a person of another race based on your beliefs about their race or are you treating him or her as an individual? Alas, a chunk of the thought leaders out there have decided that that is not the correct definition of racism.

Racism for them is all about power – a majority group having power over a minority group. And since whites historically have had all of the power, the institutions they created, such as government, schools, corporations, etc., are inherently racist and oppressive to non-whites. That Oxford definition of racism? Well, that’s just another example of how white men are racist because they created the term and then defined it. While the white man may want to hold on to his definition of racism, that’s just another form of oppression. It’s this new definition of racism that also drives the thinking behind the term “white privilege”.

The problem with morphing definitions is that it makes discussion very difficult. Like two ships passing in the night, a person using the Oxford definition of racism and another using this new, murky definition of racism may try to engage in a conversation about racism, but they will ultimately make little progress because they cannot even have a common understanding of what they’re discussing.

In order to dodge the problem of not having a common understanding of racism, let’s use both definitions to look at the story of out of Washington, D.C. In simple terms, racism for some is the individual act of judging someone solely because of their race and the other is the act of a majority having power over a minority.

“A veteran Marine sergeant was assaulted and robbed at a McDonald’s in Washington D.C. last week, in an attack the victim says was racially charged, according to police.

Police in Washington, D.C., are looking for at least four people in connection with the assault and robbery of Christopher Marquez, a Bronze Star recipient, who was one of two Marines who helped carry then-1st Sgt. Bradley Kasal out of Fallujah’s infamous ‘Hell House.’”

While the opening of the story mentions that the victim believes it was “racially charged”, you won’t actually find any mention of the race of the assailants in the article. You will only find that a group of teenagers and adults approached Christopher Marquez and started to ask Him if “black lives mattered”:

“Marquez said he believes the attack was racially motivated. He remembers being accosted at the McDonald’s in Washington’s Chinatown neighborhood by five people between 16 and 21 years old. Most were men or boys. One may have been female.

‘The kids were asking me if I think that black lives mattered,’ Marquez said on Monday. ‘I was ignoring them, just because I felt intimidated. I felt how they approached me, it was very hostile. I felt they were really trying to intimidate me and just trying to start a confrontation with me.’

The police report does not include a description of the people involved with the incident, which was first reported by the Daily Caller News Foundation. One of the suspects allegedly hit Marquez with a gun after calling him a racist, the report says. Police have not yet made any arrests in the case, a spokesman said.”

The part about the Daily Caller News Foundation on the USA Today website actually has the hyperlink to the The Daily Caller’s story on the assault. Only when you follow that link do you learn the race of the assailants and that it was all caught on surveillance video at the McDonald’s:

“Christopher Marquez, a veteran of Iraq and recipient of the Bronze Star for valor, said he was dining at a McDonald’s in northwest D.C. when a group of black teenagers came up to him and allegedly began harassing him about the black lives matter movement. Marquez ignored them which prompted calls and shouts that he was a racist.

DeAnthony Mason, manager of the McDonald’s, reviewed security footage and told Marquez in a phone call Saturday that when he left the restaurant a teen with a white shirt struck him on the side of the head, knocking him unconscious. The other teens then converged on his incapacitated body, taking his belongings. The head blow Marquez sustained left his memory dazed, but Mason’s review of security footage helped him piece together what occurred.”

We know it’s now popular for newspapers and journalists to omit the race of offenders, though it seems that is often done selectively. Is this one of those cases in which sharing the race of those who assaulted a white veteran would have gone against the dominant narrative of white oppression? Perhaps.

That said, using either definition of racism we find that if things happened as described and seen on the video, then the black teens and adults were being racist. First of all, they approached the man based on his race, presuming he was white though he’s actually Hispanic and then proceeded to verbally harass him and then physically assaulted him. Using the Oxford definition, this case would be a slam-dunk example of blacks being racist towards a white. But what about the other definition of racism?

If racism is a majority exerting power over a minority then these black teenagers and adults were also racist. The display of power does not get any simpler than a group of five attacking an individual. They were the majority, they were in power, they created the situation, they acted on their beliefs. They were racist.

Some will argue that that argument is a stretch and that it’s still not racism because it wasn’t institutional or systemic. There will probably be other arguments as well pushing back against the idea that black Americans can be racist. In the face of such arguments, we can get lost in arguments about definitions. Rather than get bogged down in semantics, shouldn’t we be inquiring into why it is that some people are so desperate to make the public believe that only whites can be racist? What’s the end goal of such an assertion?

Background: “On November 13, 2004, Marines were engaged in heavy combat as part of Operation Phantom Fury in Fallujah, Iraq. Three Marines emerged from the house, then Lance Corporals Christopher Marquez and Dane Schaffer carrying 1st Sgt Bradley Kasal to safety.  Kasal gripped his pistol and Ka-Bar tightly but Marquez and Schaffer had rushed in without weapons in order to maneuver more quickly.  The photograph by Lucian Read captured the strength and courage of all Marines and has become a symbol of brotherhood in the Marine Corps and beyond.”